A Technological Oil Wonder – The Next Huge Oil Rush 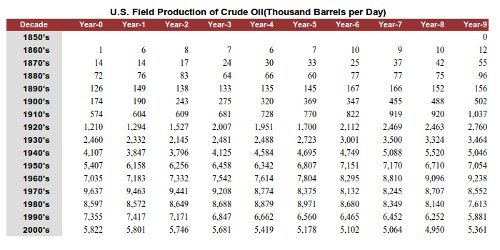 Ed Note: The U.S. Geological Survey called it the Largest Continuous Oil accumulation it has ever assessed. It spreads into Saskatchewan too. The Bakken Basin, located in Montana, North Dakota and Saskatchewan,

What the EIA Won’t Tell You About U.S. Oil Production

With 30.4 billion barrels of proven reserves and a daily production of 7.15 million barrels on the table, things were better than ever before. The 551 oil wells across the U.S. were pumping out an average of 13,000 barrels per well per day.

All it took was a small speech in San Antonio to bring everything to a crashing halt.

On March 8, 1956, a Shell geologist named Marion King Hubbert was standing on the side of the stage at the Plaza Hotel, ready to deliver his now-famous peak oil speech.

Moments away from taking his turn at the podium, he was called offstage for a phone call. It was from a worried assistant at Shell, pleading with him to “tone down” the speech. He was told that the U.S. reaching peak oil production within the next fifteen years was an absurd idea.

The phone call, however, fell on deaf ears, and Hubbert went on to speak. If you happen to be a history nut like myself, you can read his entire paper here.

We know how the story turns out. U.S. oil production peaked in 1970. You can see the peak for yourself, straight from the Energy Information Administration (EIA): And yet, it’s a crisis that too many have ignored…

I’m willing to bet my cat’s ninth life that most investors have no clue about what’s going on. And the reason I’m not worried about PETA breaking my door down is because those investors aren’t looking at the entire picture.

“Domestic production is great, isn’t it?” they say to themselves without a hint of confidence.

“After all,” they continue, “the EIA’s Short-Term Energy Outlook was brimming with good news.”

Here’s a brief rundown on their latest outlook:

If you prefer to join them with blind enthusiasm, prepare to lose a lot of money.

We’re smarter than that.

Let’s take a closer look at those EIA numbers, shall we?

In 2009, only eight states managed to increase their crude oil production over the previous year. In case you were wondering, California and Alaska – two of our three biggest oil-producing states – were not on the list. Don’t even get me started on those two.

As expected, North Dakota led the pack. Actually, if you take Texas’ 19,000 bbl/d increase out of the equation, the combined increases from the six remaining states was lower than North Dakota… it’s difficult to believe that some investors have never heard of the Bakken oil play.

This is where North Dakota is in a league of its own. In May, North Dakota’s oil production was approximately 300,000 barrels per day. That’s more than twice what the state was producing in 2007.

But it’s not just production that’s caught our attention.

It’s too bad the U.S. oil industry can’t cook the books like OPEC.

OPEC members, despite pumping more than a third of the world’s oil supply, haven’t seen a single decline in reserves over the last thirty years. It’s sad that their suspicious oil reserves have become a global joke.

You can believe them if you want. While you’re at it, you might as well wish for world peace.

Unlike OPEC, proved reserves in the United States have fallen alongside production, dropping to levels we haven’t seen since 1941. According to the EIA, the U.S. has approximately 19.1 billion barrels in proved reserves.

Still holding on to those optimistic feelings?

The Fate of Offshore Oil

Before I get any further, I wanted to quickly bring offshore drilling into the mix.

As you know, the U.S. has placed another drilling ban into effect. You can catch up on the details here.

For now, forget about the offshore drilling ban. Even if a U.S. judge doesn’t strike the moratorium down, we all know that offshore oil production is too important to the U.S. to simply abandon. More restrictions will be placed on the offshore industry. More safety protocols will be implemented.

At the end of the day, drilling will resume.

It’s either that or cozy up with Saudi Arabia again. We know how that turned out last time.

While I’m on the offshore subject, let me show you why going all-in on offshore production isn’t the best choice to make.

Although offshore oil in both Federal and State waters make up one-third of our domestic oil production, our offshore proved reserves only amount to 3.9 billion barrels. Also, that oil isn’t going to be produced cheaply, a point you should be well aware of by now.

However, there are much better opportunities out there right now…

“If you hate U.S. oil so much, why do you invest in it?” one reader recently asked me. I’ll spare you the rest of his comments, which were sent despite the gentleman having a broken caps-lock button – no surprise there.

I’ll be the first to admit that the doom and gloom tends to get the better of us when it comes to U.S. oil.

What he failed to realize, as my readers have proven to me time and again, is that the backside of the peak oil curve will be much more profitable than the ascent.

As you’ve probably guessed by now, these three oil stocks are in the thick of North Dakota’s oil patch.

Now, these are just three companies with a Bakken upside. If you do your homework, you would find dozens more oil and gas gems worth a closer look. In fact, these Bakken-weighted stocks have delivered winner after winner to my readers, with one stock alone pulling gains over 400%.

P.S. Just as BP’s disaster is finally taking a turn for the better, you can bet our legislators are going to make a grand mess of things. The U.S. House of Representatives recently passed a vote to completely overhaul the offshore drilling system. Although the government’s knee-jerk reaction was to ban offshore drilling, there’s a silver lining to this whole mess that presents us with a very profitable opportunity – and I’ve included all the details for you in this special report.