Posted by Clive Maund via CommodityOnline 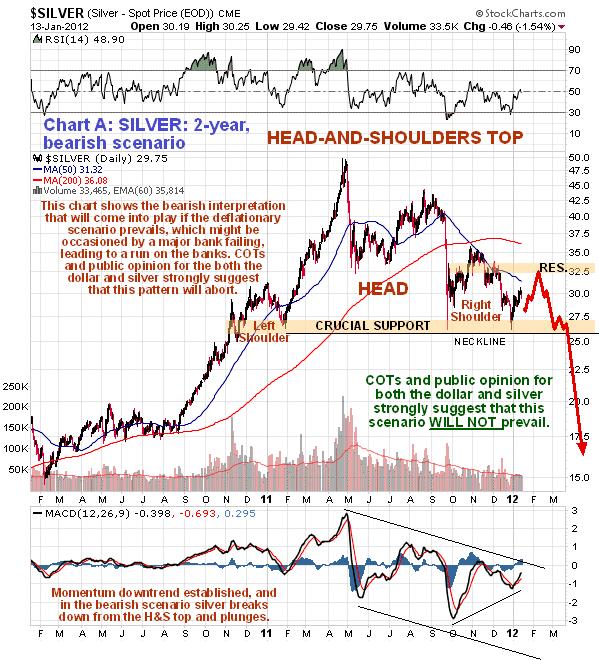 The diminution in silver’s downside momentum and the massive contradiction between our earlier bearish interpretation of the charts, and the strongly bullish COTs and sentiment indicators forces us today to reconsider the charts and ponder other possibilities, for we cannot afford to be on the wrong side of the trade in this commodity. Fortunately we are still ahead of the curve as Silver has yet to “tip its hand”, but it doesn’t look like it will be long now before it does.

So today we are going to consider two wildly different scenarios, the bearish one detailed in the last update, which may yet come to pass if deflation gains the upper hand, and the bullish one which will take hold if Europe is saved shortly and we get back to “business as usual”, i.e. building the debt and derivative mountains to ever greater heights. Right now everything is hanging in the balance – it could tip either way, but as we will shortly see it would appear that Smart Money is betting on the return to business as usual, and as they make money, by definition, we are perfectly happy doing what they do, if we can figure it out, that is.

The reason that we were wary, and are still mindful of the position of the exits, is that a large potential Head-and-Shoulders top pattern has formed in silver, as we can see on our 2-year “Scenario 1” chart for silver, which is much the same as the one shown in the last update. The support shown at the bottom of this pattern is clearly of massive importance with the price staging major reversals 3 times at it, so failure of this support, which would signify a breakdown from the H&S top, would be a very bearish development that could be expected to Lead to a severe drop.

If this scenario eventuates it would signify the onset of a deflationary downwave, such as would be precipitated by the failure of one or more major banks in Europe, leading to a chain reaction and a run on the banks. This is possible, but as mentioned above, it does not appear to be what Big Money is betting on. From a practical standpoint the one key conclusion that we should draw from this chart is that all long positions in silver should be closed out, or at least hedged, in the event of a break below the neckline support of the H&S pattern. We have until now concentrated on this Head-and-Shoulders thesis and not really considered the possibility that the entire reaction from the April high, which was a downtrend bounded by parallel trend boundaries, is quietly morphing into a strongly bullish Falling Wedge, as shown on our 2-year “Scenario 2” chart below. This became more apparent just last Thursday when the upper boundary of this proposed Wedge shaped channel forced the price to reverse yet again, giving added validity to the steeper downtrend line in force from September.

Additional bullish factors associated with this Wedge are the fact that it is fast closing up just above the zone of strong support, plus the fact that volume has died back to a low level compared to most of last year, as remaining fed up Silver investors fold their tent and call it a day. This is the stuff of which great rallies are born, particularly when it coincides with very low levels of bullish sentiment and COTs showing record bullish readings. The latest long-term COT chart, courtesy of www.sentimentrader.com, shows that the Commercials’ net position is at it most bullish ever. Within this, however, there was a marked increase in their short positions as of last Tuesday, which is a reason why we are expecting a short-term reaction. Large and Small specs have largely lost interest in silver, which is of course very bullish. The chart showing public opinion on silver was at its most negative ever about a week ago – even worse than in the darkest days of 2008 – although it recovered somewhat this past week. This is also clearly very bullish, as the last thing you want to see is public enthusiasm for something you are buying – you want that when you come to sell it.