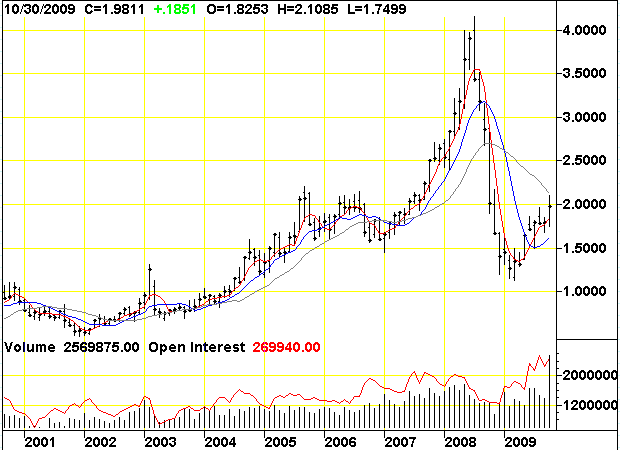 Natural gas is a gas consisting primarily of methane. It is found associated with fossil fuels, in coal beds, as methane clathrates, and is created by methanogenic organisms in marshes, bogs, and landfills. It is an important fuel source, a major feedstock for fertilizers, and a potent greenhouse gas. – Definition from

The biggest energy innovation of the decade is natural gas—more specifically what is called “unconventional” natural gas. Some call it a revolution.

Yet the natural gas revolution has unfolded with no great fanfare, no grand opening ceremony, no ribbon cutting. It just crept up. In 1990, unconventional gas—from shales, coal-bed methane and so-called “tight” formations—was about 10% of total U.S. production. Today it is around 40%, and growing fast, with shale gas by far the biggest part.

The potential of this “shale gale” only really became clear around 2007. In Washington, D.C., the discovery has come later—only in the last few months. Yet it is already changing the national energy dialogue and overall energy outlook in the U.S.—and could change the global natural gas balance.

From the time of the California energy crisis at the beginning of this decade, it appeared that the U.S. was headed for an extended period of tight supplies, even shortages, of natural gas.

While gas has many favorable attributes—as a clean, relatively low-carbon fuel—abundance did not appear to be one of them. Prices had gone up, but increased drilling failed to bring forth additional supplies. The U.S., it seemed, was destined to become much more integrated into the global gas market, with increasing imports of liquefied natural gas (LNG).

But a few companies were trying to solve a perennial problem: how to liberate shale gas—the plentiful natural gas supplies locked away in the impermeable shale. The experimental lab was a sprawling area called the Barnett Shale in the environs of Fort Worth, Texas.

Getty Images
The companies were experimenting with two technologies. One was horizontal drilling. Instead of merely drilling straight down into the resource, horizontal wells go sideways after a certain depth, opening up a much larger area of the resource-bearing formation.

The other technology is known as hydraulic fracturing, or “fraccing.” Here, the producer injects a mixture of water and sand at high pressure to create multiple fractures throughout the rock, liberating the trapped gas to flow into the well.

The critical but little-recognized breakthrough was early in this decade—finding a way to meld together these two increasingly complex technologies to finally crack the shale rock, and thus crack the code for a major new resource. It was not a single eureka moment, but rather the result of incremental experimentation and technical skill. The success freed the gas to flow in greater volumes and at a much lower unit cost than previously thought possible.

In the last few years, the revolution has spread into other shale plays, from Louisiana and Arkansas to Pennsylvania and New York State, and British Columbia as well.

The supply impact has been dramatic. In the lower 48, states thought to be in decline as a natural gas source, production surged an astonishing 15% from the beginning of 2007 to mid-2008. This increase is more than most other countries produce in total.

Equally dramatic is the effect on U.S. reserves. Proven reserves have risen to 245 trillion cubic feet (Tcf) in 2008 from 177 Tcf in 2000, despite having produced nearly 165 Tcf during those years. The recent increase in estimated U.S. gas reserves by the Potential Gas Committee, representing both academic and industry experts, is in itself equivalent to more than half of the total proved reserves of Qatar, the new LNG powerhouse. With more drilling experience, U.S. estimates are likely to rise dramatically in the next few years. At current levels of demand, the U.S. has about 90 years of proven and potential supply—a number that is bound to go up as more and more shale gas is found.

To have the resource base suddenly expand by this much is a game changer. But what is getting changed?

It transforms the debate over generating electricity. The U.S. electric power industry faces very big questions about fuel choice and what kind of new generating capacity to build. In the face of new climate regulations, the increased availability of gas will likely lead to more natural gas consumption in electric power because of gas’s relatively lower CO2 emissions. Natural gas power plants can also be built more quickly than coal-fired plants.

Some areas like Pennsylvania and New York, traditionally importers of the bulk of their energy from elsewhere, will instead become energy producers. It could also mean that more buses and truck fleets will be converted to natural gas. Energy-intensive manufacturing companies, which have been moving overseas in search of cheaper energy in order to remain globally competitive, may now stay home.

But these industrial users and the utilities with their long investment horizons—both of which have been whipsawed by recurrent cycles of shortage and surplus in natural gas over several decades—are inherently skeptical and will require further confirmation of a sustained shale gale before committing.

More abundant gas will have another, not so well recognized effect—facilitating renewable development. Sources like wind and solar are “intermittent.” When the wind doesn’t blow and the sun doesn’t shine, something has to pick up the slack, and that something is likely to be natural-gas fired electric generation. This need will become more acute as the mandates for renewable electric power grow.

So far only one serious obstacle to development of shale resources across the U.S. has appeared—water. The most visible concern is the fear in some quarters that hydrocarbons or chemicals used in fraccing might flow into aquifers that supply drinking water. However, in most instances, the gas-bearing and water-bearing layers are widely separated by thousands of vertical feet, as well as by rock, with the gas being much deeper.

Therefore, the hydraulic fracturing of gas shales is unlikely to contaminate drinking water. The risks of contamination from surface handling of wastes, common to all industrial processes, requires continued care. While fraccing uses a good deal of water, it is actually less water-intensive than many other types of energy production.

Unconventional natural gas has already had a global impact. With the U.S. market now oversupplied, and storage filled to the brim, there’s been much less room for LNG. As a result more LNG is going into Europe, leading to lower spot prices and talk of modifying long-term contracts.

But is unconventional natural gas going to go global? Preliminary estimates suggest that shale gas resources around the world could be equivalent to or even greater than current proven natural gas reserves. Perhaps much greater. But here in the U.S., our independent oil and gas sector, open markets and private ownership of mineral rights facilitated development. Elsewhere development will require negotiations with governments, and potentially complex regulatory processes. Existing long-term contracts, common in much of the natural gas industry outside the U.S., could be another obstacle. Extensive new networks of pipelines and infrastructure will have to be built. And many parts of the world still have ample conventional gas to develop first.

Yet interest and activity are picking up smartly outside North America. A shale gas revolution in Europe and Asia would change the competitive dynamics of the globalized gas market, altering economic calculations and international politics.

This new innovation will take time to establish its global credentials. The U.S. is really only beginning to grapple with the significance. It may be half a decade before the strength of the unconventional gas revolution outside North America can be properly assessed. But what has begun as the shale gale in the U.S. could end up being an increasingly powerful wind that blows through the world economy.