Posted by Richard Mills: Ahead of the Herd 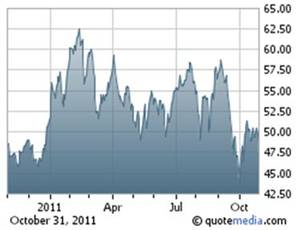 As demand for food rises, so does the requirement for crop nutrients.

Potash has unique characteristics:
High-quality, economically viable deposits are rare
Major offshore markets have little or no indigenous production capability
Barriers to entering the business are significant
Potash has been historically under applied relative to nitrogen and phosphate
Limited new operational capability is expected
Higher crop yields are needed in order to feed today’s global population of seven billion so strong fertilizer prices are sustainable. Over the next fifty years, as we add another 4.5 billion people to the world’s population, global demand for food will increase almost 70% if population growth predictions are correct.

The sheer amount of people being born every year, the loss of arable land and the change of diet among a newly prosperous, urban population in developing countries are the most important factors stoking the rise in global food demand.

A rising income means more money in the household budget. The new middle class consumers forgo plant based calories in favor of adding more protein from meat and dairy products to their diets. It takes up to eight kilograms of grain to produce one pound of beef – less for pork, chicken, milk or eggs – between 2kg and 6kg. As meat consumption soars, more grain is needed to feed more livestock.

Enlarging and diversifying the meat supply is a first step for every developing country.

The more people there are on this planet and the more Asians, and others, decide they want a western style diet the more grains/oilseeds are needed to feed them. And many of those very same grains are needed to raise the animal protein, the beef, pork and chicken they want.

Potash Corporation of Saskatchewan Inc. (NYSE:POT), the world’s largest fertilizer producer by market value, doubled its third quarter earnings, reporting 94 cents per share or $826 million compared to 38 cents per share or $343 million a year ago. During the first nine-months of 2011, the company’s earnings have doubled from $1.39 per share during the same period last year to $2.73 per share today. Net income of US$826 million was the second highest Q3 profit in the company’s history – gross margin reached US$1.1-billion. Potash production was 1.9 million tonnes, a third quarter record for Potash Corp. The company said demand was strong from both North American and international customers.

“Crop prices remained at historically high levels [in the third quarter] and farmers continued to strive for increased production to capitalize on the economic opportunity in agriculture. As a result, demand for our potash, phosphate and nitrogen products remained strong.” Bill Doyle chief executive of Potash Corp.

While total shipments from the global potash industry will rise to between 58 and 60 million tons in 2012, up from Potash Corp.’s forecast of 57 million for 2011, Mr. Doyle predicted a very tight potash market in 2012, saying the industry continues to face capacity constraints and will struggle to keep up with demand. The cost of fertilizer as a percentage of corn revenue is 13%, 18% is the norm.

Global grain stocks remain at extremely low levels. Potash Corp. said at the beginning of the year that it would take two years of record harvests to get inventories back to comfortable levels, 2011 has been referred to as a lost year. According to figures compiled by Bloomberg potash prices averaged 27 percent higher in the third quarter compared with a year earlier.

AMEC was chosen to carry out the Study because of their technical expertise as engineers and EPCM contractors, as well as their experience in potash mine construction, potash processing and their expertise in producing potash feasibility studies.

This Study confirms that the Milestone Project shows significant positive economics and that the asset is of sufficient size and grade to support primary and secondary solution mining for more than forty years at a production rate of 2.8Mt/yr. The Milestone Project hosts a potash resource which consists of 64 million tonnes of Measured Resource (contained KCl), 180 million tonnes of Indicated Resource, and 701 million tonnes of Inferred Resource. The Study was based on, and supported by, the NI43-101 Technical Report “Updated Technical Report Concerning Mineral Resource Estimates Subsurface Mineral Lease KLSA 008 Saskatchewan”, dated June 8, 2011 and filed on SEDAR on June 10, 2011. An assessment of project economics was also included in the Study. Assuming a discount rate of 10%, the resulting project Net Present Value is $4.14B CAD, while the Internal Rate of Return is 22.7 %. The economics were modeled using pricing based on a CRU market report. This report provided average yearly potash price estimates for the period from 2015 through 2025. The average for those years, equating to $US 511/t, was used for the 2025 to 2055 period. The economic model assumes a flat US$ exchange rate, CAPEX based on 100% equity, and tax and royalties calculated using a flat rate of $28.90/t CAD. A complete list of the assumptions used in this model can be found in Table 1. Since the analysis is based on a cash flow estimate, it could be expected that actual financial results may vary from these predictions.

The Study includes all facilities required to operate a potash solution mine, including a cavern and well field layout, a two-train multiple effect evaporization-crystallization plant, a dry processing plant, product storage, load out and all other necessary site infrastructure. This design was detailed to a sufficient level to allow the capital cost estimate to be upgraded to AACE “Class 4” standard. The annual production rate can be expanded to a higher annual production rate, achievable through a higher level of capital expenditure.

This Study was intended to provide a high degree of project definition, building on the Scoping Study completed in 2010. The Prefeasibility Study commenced with the completion of tradeoff studies where important design options were investigated. Ultimately a single plant design was identified, which was carried through the Study.

Agapito Associates, Inc. was contracted by the Company to complete the Solution Mining Design for the Study, which included a solution mining plan and schedule, well field design, cavern layout and recovery modeling, and subsidence analysis. AAI’s experience includes work for Intrepid Potash Inc. in the US, Rio Tinto and Vale at the PRC project in Argentina, and work for several prospective potash projects located in Saskatchewan.

Capital and operating cost estimates were generated with a target accuracy of Aplus or minus 20%, typical for this level of Study. The initial CAPEX estimate for the plant is $2.758B CAD, including allowances for port infrastructure, water supply pipeline, and off site railway. An allowance of $300M CAD has been included for port infrastructure which was excluded from the Company’s Scoping Study completed in 2010. Removing this allowance for port from the current Study results in an approximate 2% reduction in initial CAPEX when compared to the Company’s Scoping Study.

Construction is assumed to take place over a three year period, with production beginning in project year three. Full primary and secondary production will be achieved over a six year ramp up period.

The Project unit operating costs were estimated to be $62.35/tonne CAD at full production capacity. These operating costs include estimates for labour, maintenance, power, natural gas, water, consumables, diesel, and uncapitalized well field operations. Operating costs do not include taxes, royalties, or the costs associated with transportation to port and ship loading. Sustaining capital has been projected to remain flat at 0.5% of replacement cost for the first 10 years of operations. Sustaining capital ramps up from 0.5% to 2.0% of replacement cost between years 14 and 23 of the Project.

The Study resulted in significant advancement of the level of definition of the project. The Milestone Project remains economically very strong with no known limitations that may prevent a successful and profitable project outcome. The Study recommends immediate commencement of a Feasibility Study which will adhere to the AACE “Class 3” classification for projects.

“The PFS confirms the compelling opportunity that the Milestone project represents for the Company and the Province of Saskatchewan to develop a world class potash mining operation. In addition to the 40 year scope of mining contemplated in the PFS, the known resource is sufficient to support ongoing mining for an additional 40 years and beyond. We are pleased with the on time and on budget delivery as well as the thorough analysis of the available options considered for project optimization. The coordinated efforts of the internal and external teams are to be complimented for their work in delivering a comprehensive report, a critical step as the Company continues the process of de-risking the Milestone asset.” Patricio Varas, Western Potash CEO and President

Potash, and Western Potash Corp. TSX.V – WPX in particular, should be on every investors radar screen. Is it on yours?

If you’re interested in learning more about the junior resource sector, bio-tech and technology sectors please come and visit us at www.aheadoftheherd.com

Site membership and our AOTH newsletter are free. No credit card or personal information is asked for.

This document is not and should not be construed as an offer to sell or the solicitation of an offer to purchase or subscribe for any investment. Richard Mills has based this document on information obtained from sources he believes to be reliable but which has not been independently verified; Richard Mills makes no guarantee, representation or warranty and accepts no responsibility or liability as to its accuracy or completeness. Expressions of opinion are those of Richard Mills only and are subject to change without notice. Richard Mills assumes no warranty, liability or guarantee for the current relevance, correctness or completeness of any information provided within this Report and will not be held liable for the consequence of reliance upon any opinion or statement contained herein or any omission. Furthermore, I, Richard Mills, assume no liability for any direct or indirect loss or damage or, in particular, for lost profit, which you may incur as a result of the use and existence of the information provided within this Report.

Richard Mills does not own any shares of Western Potash Corp. TSX – WPX