A Visual of the Last Decades Winners and Losers 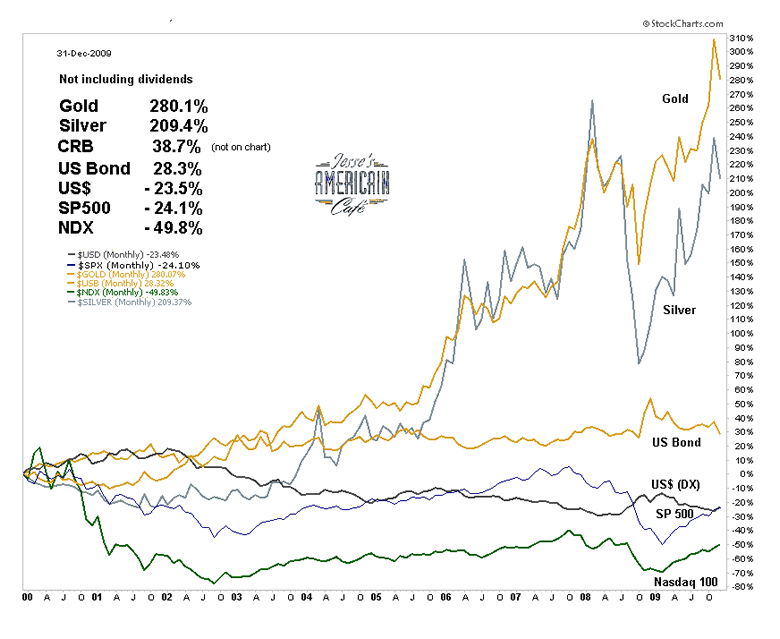 Via Richard Russell: They call it “the poor man’s gold.” But don’t turn your nose up at silver. The dollar was originally defined in terms of silver. When precious metals are on the rise (as now), silver tends to be seen as a monetary metal. When times are bad, silver is seen as an industrial metal. Silver has a huge number of industrial uses, silver is the best conductor of electricity. Unlike gold, silver is actually used (and used up) in industry. Thus, a large amount of silver is lost every year. In contrast, 85% of all the gold ever mined in all history is still around; it’s in your teeth or in your sweeties’ bracelet or in that ancient Egyptian ring that you see in your local museum.

Historically, when silver gets going, it tends to make huge percentage moves. I think you can see that from the long-term chart below. For instance, back in November 2008, silver was selling for 8.65 an ounce. Today an ounce of silver is selling for 18.10 an ounce, more than double.

Yesterday, both gold and platinum closed at new highs for the move. Silver is lagging behind, but when silver finally catches up, it may be a stunner. Over the last year the price of silver doubled; gold didn’t perform that well.

To put it briefly, I like silver. Gold has one advantage over silver, every central bank owns some gold, and most want more.

Ed Note: Richard Russell is still bullish Gold and holds one of the largest single positions he has held in his life in the precious metals.