A Peek into the Future 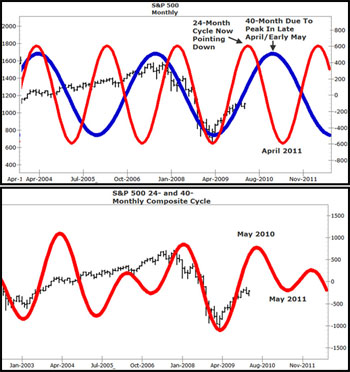 Another Peek Into The Future …

Readers love my cycles approach to the markets because it lets them peek into the future paths of market action in various assets.

So in this issue, I’ll give you an updated glimpse into the future of some key markets using cycle analysis — the historical study of the internal rhythms and hidden forces that truly drive the markets. It’s the best forecasting method I know of.

I’ll cover what’s foremost on readers’ minds: The Dow Jones Industrials, the dollar, and gold. Then, I’ll show you a startling new forecast.

First, the broad stock markets: As many of you already know, my work on cycles caught the big March bottom last year, to the tee, and also projected a rally into January 2010.

That forecast was right on the money, and, we took advantage of it racking up loads of profits in several of my suggested investments to capitalize on the rally. Looking at the first cycle chart of the S&P 500, you will notice that the 24-month trading cycle is now pointing down. This is the same cycle that gave birth to the sharp decline in mid-January/early February that saw the Dow plunge from 10,729 on January 19, to 9,835 on February 5.

However, the 40-month cycle has not yet topped out. So what did the market do? It has rallied back, to as high as 10,469 as I pen this column. And, it may even move to a slight new high in the weeks ahead, as the 40-month cycle is not due to top until late April/early May.

From there on out, though, we should see both the 24- and 40-month cycles exert a strong downward bias to the market that lasts for up to a full year, with no abating in selling pressure until April 2011.

Now look at the second chart above, the composite 24- and 40-month cycle in the S&P 500. It confirms the individual components of these important trading cycles, showing a high due in May of this year, followed by a decline into May 2011.

So what can you learn from these two charts? How should you position your investing and trading for the months ahead?

First, that the downside in the broad stock markets right now is still limited, due to the 40-month cycle that’s still rising. So, I would not be aggressive yet on the short side of the markets.

Second, the broad stock markets are, however, getting close to an important top. So, if you’re long the market and have profits, I would strongly consider grabbing as many of those profits as you can, much like I’ve done for you here in the past few editions of my column.

Third, I would prepare to soon short the broad markets, via inverse ETFs, such as the ProShares Short Trust S&P 500 (SH), an inverse ETF you can buy that effectively shorts the market for you.

What about all the bearish news out there right now? The sovereign debt crisis, the plunging currencies in Europe, the renewed collapse of housing sales, and more? Don’t they scream SELL right now?

No, they don’t. Keep in mind that news should never be used to time your trading and investing. After all, how many times have you bought a stock in anticipation of positive earnings … the earnings were announced and beat expectations … and yet, the stock fell out of bed?

Or conversely, how many times have you seen a stock you expected to fall based on bad news, and instead, the stock skyrockets?

If you’re like the average investor, you’ve seen that kind of supposedly illogical market behavior hundreds or even thousands of times.

The bottom line is that markets and individual securities and asset classes follow their own unique trading cycles and rhythms, and if you try to time your investing and trading based on news alone, or even pure fundamental analysis, you will never make any decent money in the markets, let alone keep that money.

The only, truly accurate and profitable way to invest in the markets is to understand and quantify the markets differing personalities, which is what the rigorous study of market cycles does for you.

Right now, for instance, although we are starting to see more negative news come to the forefront (as compared to the last nine or 10 months where the market was rallying), I can assure, the negative news you are hearing will pale in comparison to the news that will come out in the months ahead as the 40-month cycle for stocks turns down.

This is a never-before-published chart of my cyclical analysis of the dollar. It shows you the 15-year cycle in the dollar, the thick red line that spans almost horizontally across the chart …

… as well as the 10-, 19- and 39-month trading cycles for the greenback that I’ve found highly reliable for forecasting short-term moves.

Notice how the trading action for the dollar since 2002 has followed these cyclic projections very closely.

Now, most importantly, what does this chart tell you about the future of the dollar?

First, the long-term, 12- (not shown) and 15-year cycles continue to point lower.

Second, the short-term cycles are now in rally mode. BUT — very importantly — they’re not likely to cause the dollar to rally much, because …

A. They’re short term, and therefore, by definition, weaker than the longer-term cycles that are negatively impacting the dollar.

B. Previous instances of the 10-, 19- and 39-month cycles have NOT produced substantial rallies.

Bottom line: This chart tells me the dollar, as I’ve mentioned previously, is not yet ready to meet its final fate.

Rather, the dollar is likely to experience wild swings both up and down for the next year or so, and then, plunge into a tailspin in 2012, which I believe will also mark the birth of an entirely new monetary system leading to a single world currency, at least for international trade purposes.

So what does this chart mean for your investments, in terms of the dollar?

First, for the short term, say the next year or so, it’s ok to keep your basic cash needs (basic savings, working cash to pay bills, etc.) in dollars.

Second, to the extent you can, you should be preparing for the eventual and inevitable demise of the U.S. dollar as the world’s reserve currency.

That’s a bit early according to the cycles, but I would rather be early moving my money safely out of the dollar, than be late and caught in what will turn out to be the biggest currency disaster of all time.

Moving out of the dollar can take many forms, including …

I’ll go into details on the above issues — moving money offshore — in future issues. So stay tuned for more on this subject.

In the meantime, suffice it to say that we are in the throes of the dollar’s last days, and while there is no need to panic right now, there will be if you don’t keep the above cyclic picture and timing for the dollar collapse at the forefront of your thinking!

Now, to the only real currency in the world, gold:

First, to the right is a previously published weekly cycle chart of gold, where I forecasted a January 2010 high. Since then, gold swooned a bit, but has also now recovered reaching as high as $1,145 on March 3.

Where to now for gold? Referring to the same cycle chart, gold should pullback slightly into late April, but then take off again to another, and probably a new record high, in August of this year.

What’s more, is that the long-term cycles for gold continue to point decisively higher, into the January to March period of 2013, and where I fully expect gold to reach at least $2,300 an ounce, if not much higher.

You can see the long-term cycle in this second chart of gold, which shows the important 8.6 year cycle in gold reaching a peak in early 2013. Bottom line: Gold’s long-term bull market remains very much intact. After some short-term weakness, gold is set to rally strongly into August 2010. And much higher thereafter going into early 2013.

The above look into the future for stocks, the dollar, and gold — are not something to take lightly. They are your roadmaps for the future, and, they are fully consistent with the underlying fundamentals that are unfolding right before your eyes …

And there’s more, much more, chaos and wild market swings coming in the months and years ahead.

To be forewarned, is to be prepared.