What the US Goverment Doesn’t Want You to Know

Posted by Equedia - via Peter Grandich 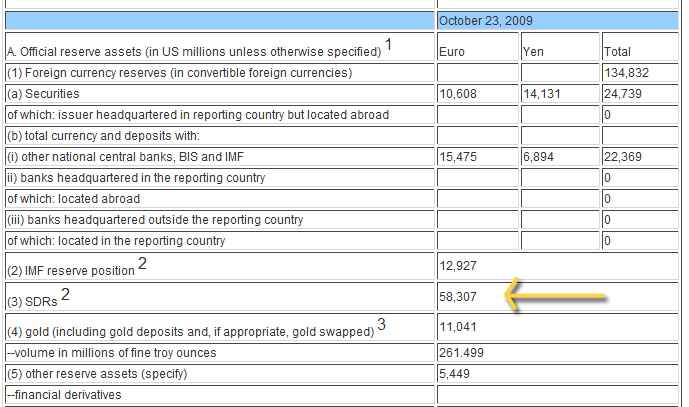 Over the last few weeks,we talked about the process of mining and mining feasibility studies to help us better understand the basics of investing in resource-based companies. As a follow up to last week’s newsletter on mining feasibilities, I said that we would go into more depth about the principles of these studies.

But this week, I am skipping that because I want to bring your attention to an incredible opportunity that is slowly, yet rapidly, beginning to show itself.

We all know the world is beginning to doubt the US dollar. We’ve all heard the rumours of talks amongst powerful nations to remove the US dollar as the main currency for trading oil. We know inflation will eventually follow.
But there is shocking proof that even the US is beginning to doubt the Dollar.
Hidden from the media over the past few weeks, the U.S. Treasury has been liquidating billions of U.S. dollars and trading it for a special currency you may have NEVER heard of – the same currency that China, Russia, oil-bearing Gulf countries, the UN, the IMF (International Monetary Fund), the World Bank, and many others have already suggested to replace the greenback as the world’s main reserve currency.

The SDR is an international reserve asset, created by the IMF in 1969 to supplement its member countries’ official reserves. Its value is based on a basket of four key international currencies (currently the U.S. dollar, Euro, Japanese Yen, and the British pound), and SDRs can be exchanged for freely usable currencies.

General SDR allocation took effect on August 28, 2009 and a special allocation took place on September 9, 2009, which increased the amount of SDRs from SDR 21.4 billion to SDR 204.1 billion (currently equivalent to about $317 billion). And guess who took a large chunk of that? We’re not telling you to go out there and pick up this currency – you can’t.

But this is a clear sign that the U.S. government is making moves to hedge against its own falling Dollar.

And if ever there is an actual changeover in reserve currency dominance by the US (which many powerful people are discussing) it would send the value of the U.S. dollar plummeting. Combine that with the inflationary woes that everyone has been talking about, we could see the U.S. dollar at all-time lows.

The U.S. national debt is crossing $12 trillion – about $40,000 for each citizen – and doesn’t include other future financial obligations, like Social Security and government-sponsored health care under Obama’s rule. Analysts estimate that these future obligations could cost the United States up to $100 trillion!

With an exploding budget deficit and thinning credit, the federal government will be forced to create a plethora of new U.S. dollars to help finance the country and repay debt.

Although this inflationary conundrum has yet to place, the smartest and richest all know that it will happen eventually – including the US. Before this happens, we need to prepare for the upswing in the right markets.

Fortunately, there’s still some time before this strong inflationary period will start to have a negative effect on the dollar. This means good news for us because it gives us enough time to prepare ourselves for the bang.

There are plenty of easy ways to invest in these commodities, including ETFs, stocks, futures, and options. Exposure to other foreign currencies, such as the Euro and Japanese Yen, can also provide a good hedge against a devaluing dollar.

For us, we like to stick with the resource junior stocks.

They have the ability to indirectly take advantage of climbing commodity prices and have the ability, at any given moment, to give you a significant return on your investment – more so than buying bullion or ETF’s themselves.

The most powerful governments, central banks, and investment groups in the world continue to hoard their gold reserves in anticipation of a significant rally in prices. Over the past few weeks, our mailboxes have been littered with comments and suggestions requesting us to focus more on gold and gold company editorials.

It’s no surprise that gold has become the hottest topic in 2009. Next week, we’ll talk about why it has everyone’s attention and how we can profit from this apparent opportunity.

Equedia is an investor relations firm, a dedicated social media platform for business, and a financial broadcaster of syndicated stock market content.