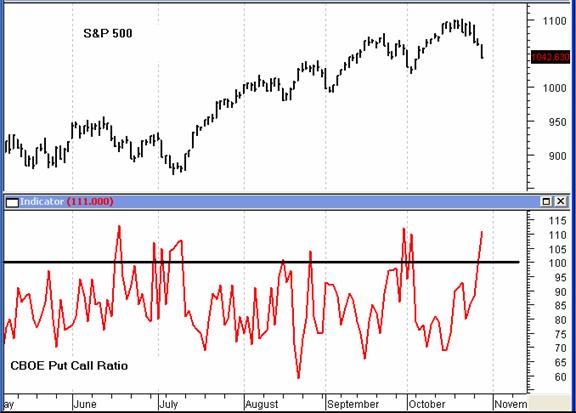 So now we have a fiercely oversold market sparked by a Dow Theory non-confirmation.

This should revive bullish sentiments although I believe only sharp traders and speculators will profit from this “sudden” rally. As I see it, the bear is passing time and having a little fun with the stock market crowd. And all the time, the top of this rally from the June low grows bigger and bigger. By the way, now you see why I warned subscribers to avoid selling short. If you’re short, you can be killed by a rally of this intensity. – Richard Russell July 7th Dow Theory Letters

SENTIMENT POLLS GET THE BULLS EXCITED

Well, we had Doug Kass declare that the lows were already turned in and at the same time we received the Investors Intelligence poll showing that sentiment was at the lowest level since July 2009.  Interestingly, back in July of last year, the S&P 500 was struggling at the 900 level!  Anyway, the reality is that bulls still outnumber the bears— 37.0% (from 41.1%) versus 34.8% (from 33.3%).  Believe it or not, the correction camp only has 28.2% in their ranks. – Full Rosenberg Report HERE

There were a few positive news items on Wednesday, but for most of the session, observers were remarking that the rally wasn’t being driven by anything in particular, as if that were a negative.

Actually, some of the best rallies come when everyone is scratching his or her head and can’t figure out why it’s happening. Today on CNBC, a lot of analysts were telling us that this is just a flash in the pan. We didn’t hear anyone say that it was time to get on board.

We have found that when 10 day RSI becomes oversold and curls up sharply, that it is normally an indication that the market wants to go higher although there have been a couple of recent failures. We can see this in the chart below. In other words, it’s not enough to be oversold, the market has to demonstrate that it can rally in an impressive manner. We would have preferred better volume, but it was better than yesterday’s.

We’re still in the grip of a pattern of declining tops and bottoms, but we’ll stick our neck out here a bit and move back to a bullish short term posture. The dollar dropped and this helped gold, silver, copper and crude oil to a bounce. Bonds were down for the session.

Our intermediate term systems are on a sell signal.

System 2 traders are in cash. Stay there on Thursday.

System 7 traders should stay in cash for now.

MBA purchase applications dropped 2.0%. This was less than last month’s drop of 3.3%. On Thursday we get jobless claims and crude oil inventories.

We’re on a sell for the dollar and a buy for the euro as of June 15.

Since 1984, the editor and publisher of the Todd Market Forecast, a monthly newsletter with emphasis on the stock market, but also with sections about gold, oil, currencies and bonds.

Steve spent a number of years as an engineer in a steel mill before becoming a stock broker with a number of Firms, including E.F. Hutton, Bache and Paine Webber.

He has published articles on the economy and the stock market in the following publications: Barron’s, Stock Market Magazine, Futures Magazine, The National Educator and others.