A Few Truths About Oil 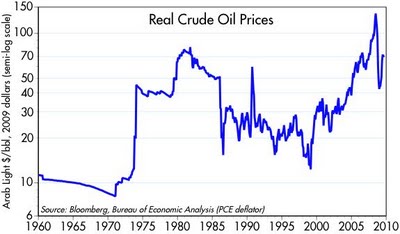 It’s been awhile since I’ve posted anything on the energy market, and I happen to have some interesting charts on the subject to share. This first chart is the real (in constant 2009 dollars, per the PCE deflator) price of crude oil going back to 1960. Oil has been trading around $70 for the past 3 months, and there is lots of talk about how inventories have risen and demand is on the verge of weakening, and thus we could see a big decline in oil prices soon. I’m not an expert on oil, so I don’t have any strong views one way or another. But I would note that oil today is almost as expensive as it was in the early 1980s. It stayed up at these levels for a few years, then it came crashing down and remained relatively cheap from the late 1980s to the late 1990s. The reasons for the big drop in oil prices were simple: the economy became more energy efficient, and world oil production increased. High prices do indeed work to bring prices down over time, though sometimes it takes many years for this to play out. This next chart shows the percentage of personal consumption expenditures that is devoted to energy goods and services. Note that spending on energy was exceptionally high in the early 1980s, when oil was about as expensive then (in real terms) as it is now. Yet today, consumers are spending about half as much of their budget on energy as they were in the early 1980s. This is truly remarkable, and one reason that we are able to spend so much more of our budgets on healthcare.

This next chart shows why it is that energy consumes so little of households’ budget. Simply put, it takes about half as much energy to produce a unit of output today as it did in 1980. Our economy has become far more energy efficient, thanks to technological improvements in fuel efficiency changes in consumers’ buying habits (e.g., smaller and more fuel efficient cars, etc.). The last chart shows how remarkable all of this is. Despite the fact that the U.S. economy has more than doubled in size since 1980 and the population has increased by some 35%, we consume about the same amount of oil today as we did back then. That’s a truly remarkable fact: U.S. oil consumption has not changed on balance for the past two decades. This collection of facts tells me a few things.

For one, it will likely be very difficult for the U.S. to increase its energy efficiency as much in the next 20 years as it did in the past 20 years, regardless of whether we impose some form of carbon tax on ourselves. That’s because there is likely a limit to the efficiencies that can be wrung out of oil-based energy technology—surely we have picked much of the low-hanging fruit already.

Two, while energy is still quite expensive in real terms today, it represents a relatively small part of households’ budgets; thus households don’t have as much incentive to become more energy efficient today as they had two decades ago. Thus, a carbon tax might have to be punitive in order to produce the desired effect, and that in turn would have very negative (and politically undesirable) consequences for the economy. Finally, all of this illustrates that the free market is able to respond rather dramatically—given time—when rising prices signal a relative shortage of some key commodity like energy.

Scott Grannis was Chief Economist from 1989 to 2007 at Western Asset Management Company, a Pasadena-based manager of fixed-income funds for institutional investors around the globe. He was a member of Western’s Investment Strategy Committee, was responsible for developing the firm’s domestic and international outlook, and provided consultation and advice on investment and asset allocation strategies to CFOs, Treasurers, and pension fund managers. He specialized in analysis of Federal Reserve policy and interest rate forecasting, and spearheaded the firm’s research into Treasury Inflation Protected Securities (TIPS). Prior to joining Western Asset, he was Senior Economist at the Claremont Economics Institute, an economic forecasting and consulting service headed by John Rutledge, from 1980 to 1986. From 1986 to 1989, he was Principal at Leland O’Brien Rubinstein Associates, a financial services firm that specialized in sophisticated hedging strategies for institutional investors.