7 Forces for a Bumper Crop Loaded with Dynamite 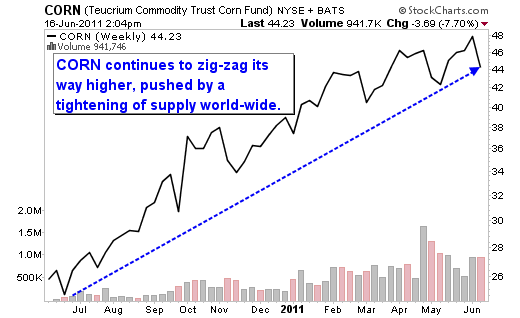 While many commodities have taken their lumpsin recent weeks, corn continues to hammer its way higher. Take a look at this chart of the Tuecrium Commodity Trust Corn Fund (CORN), which holds a basket of corn futures … 7 Things You Need to Know About Corn

Despite that fact that corn has already enjoyed a good run, I’m pretty bullish on corn going forward. Here are seven things you may not know about corn …

2) As dismal as those projections are, the government estimates for the corn harvest are still too damned high, according to Goldman Sachs. The big bank says flooding along the Missouri and Mississippi rivers alone could drown 1 million acres of corn. Goldman says that the corn harvest will probably come in 70 million bushels below government estimates. The bank says that official forecasts for wheat and soybean harvests may also be too optimistic.

“We reflect the impact of delayed planting, poor weather and flooding in lower yield and higher abandonment projections,” Goldman Sachs analysts wrote in a note to clients.

3) Corn has doubled in price in the past year and recently went to a 3-year high after wet weather delayed U.S. planting and demand increased for ethanol and livestock feed. Corn futures for July delivery reached a record $7.9975 a bushel last week on the Chicago Board of Trade, and closed at a 40.5-cent premium to July wheat on June 9. That’s the most expensive spread between the two contracts in 15 years! This, in turn, should boost wheat demand, because wheat can be partially substituted for corn in animal feed.

4) Soaring prices for corn is a major reason why China’s food costs inflated in May by their largest jump in three years. China’s National Statistics bureau said on Tuesday that consumer prices rose 5.5% over a year earlier, driven by an 11.7% jump in food costs. That was up from April’s 5.3% rate. Severe drought and other weather disasters have taken their toll on China’s corn crop. Since corn is a major source of animal feed, this drives up meat prices, too!

Analysts are already scoffing at official Chinese predictions of a bumper corn crop this year.

6) The United States is the world’s largest producer and consumer of corn, and is China’s biggest agricultural supplier. America supplied 27% of China’s import market of food last year, reported the Global Trade Information Services. In other words, China needs our grain more than we need Saudi oil.

7) It’s not just China. The popular uprisings that roiled parts of the Middle East including Tunisia and Egypt were fueled by soaring food prices. Egypt in particular is a failed state, and the worsening crisis could impact Egypt’s own food production, increasing its demand for foreign imports to feed its 80 million people.

A Roller Coaster Loaded with Dynamite

Agriculture prices are among the most volatile in commodities. There will be downs as well as ups in corn prices.

There are forces that could drive corn prices lower. For example, the USDA recently raised its estimate of how much of the corn crop is in good to excellent condition, from 67% to 69%. That doesn’t sound like a lot, but in a market this volatile, it was enough to take some of the heat off this week.

And other countries like Argentina can also export large amounts of corn. But add in weather that is hammering farm belts around the planet, and corn has every shot at much higher prices.

How You Can Play This Trend

The CORN fund is already in the Crisis Profit Hunter portfolio, and subscribers should have nice open gains. Other ways to play higher corn prices include Archer Daniels Midland (ADM) and Corn Products International (CPO).

Whatever you do, do your own due diligence and make sure any investment is right for you before you buy it.

Sean Brodrick is a natural resources expert and editor of Crisis Profit Hunter, a monthly newsletter with a primary mission to help you profit from crisis situations and other dynamic forces affecting the global economy. Commodities and dividend-paying stocks are central to his approach, and he also delivers practical advice for uncertain economic times. For more information on Crisis Profit Hunter, click HERE.