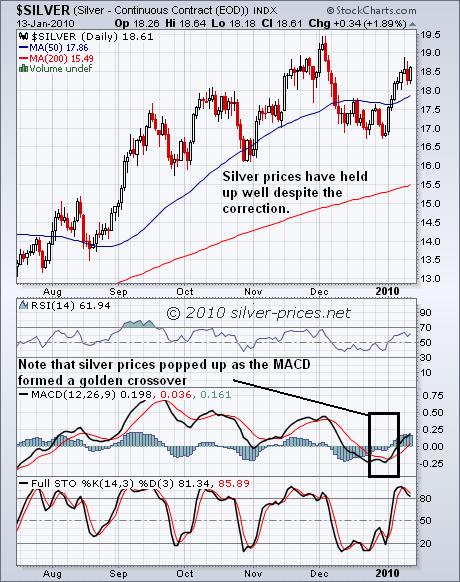 Since the last update in September 2009 silver prices have performed in a yo-yo fashion and are only slightly higher now than they were then. However, as we can see from the above chart the moving averages have moved consistently higher adding support to the silver price which bodes well for the future. Note that silver prices popped up recently as the MACD formed a golden crossover, which is usually a positive indicator. Also note that silver prices have held up well despite the correction, which we believe was a good thing for silver as we look forward to silver making a steady upward climb.

Over the last few months a number of bears have been calling for precious metals to fall, the bull market is over, the dollar is going to the moon, etc. We have not changed our position and remain very firm supporters of both gold and silver and their associated stocks. We don’t have a penny in the mainstream or broader markets and have no intention of investing there in the foreseeable future.

In our opinion both silver and gold are still a dollar play and therefore we must keep an eye on the dollars behaviour. It has had a rally recently which now looks like it has run out of steam and could fall quickly. Should this happen then new highs for both silver and gold will be more than just a possibility.

Here is a summary of the silver stocks we are currently invested in or following:

Hecla Mining Company (HL) – Initially we bought this stock for $5.27 – a quality silver stock which was going along nicely and then we thought Hecla was overbought, as it hadn’t corrected with other silver stocks, we took profits on Hecla at $11.89, the stock price then dropped so we bought it back at $9.72, getting a 18% discount on our shares. On the 14th April we sold 50% of this stock for $11.79 in order to lock in some profits as we anticipated a fall. On the 18th June 2008 we re-purchased Hecla’s shares for $9.61. Hecla has traded as low as $0.99 and closed yesterday at $6.29. Hopefully Hecla can continue to improve and eventually surpass its previous highs. Silver Standard Resources Incorporated (SSRI) Initially we bought this stock for $19.98 and on the 20th August we gave another BUY signal when we wrote “we think Silver Standard is at a good level to buy at the moment and we bought today at $28.99” giving us an average purchase price of $24.48. On January 31st, 2008 we reduced our exposure by selling around 50% of SSRI for an average price of $34.82 locking in a profit of 42.22%. SSRI dropped to $7.99 during in the sell off but recovered well to trade at $19.16 last month and yesterday it closed at $23.72, a step in the right direction. Endeavour Silver Corporation (EXK) – We initially bought Endeavour for $3.97 and on 7th December 2007 we bought more shares saying; “EXK is down from over $5.50 and as it has been beaten down so much we are signaling a BUY again on this stock and we made a further purchase bringing our average price to $4.10 per share as we doubled our position.” we secured EXK for $3.26 on the 2nd April 2008. Great results and the ability to do what they say they are going to do have propelled this stock northwards from $1.75 in September to close at $4.38 yesterday. Minco Silver Corp (MSV) – Bought for $2.80 as a speculative move, it later dropped to trade at $0.40, which hit us hard, however it has been showing signs of recovery during and during the last update it traded at $2.00 closing yesterday at the same price of $2.00. However, it has made no progress and may go if performance does not improve. The world remains full of financial turmoil, the outcome of which we expect to be the continuing demise of the dollar and an ever-increasing recognition of both silver and gold as the only place to be. Apart from precious metals we do not hold any other stocks as we are believe that this sector is about to boom.

Have a sparkling week.

To stay updated on our market commentary, which gold stocks we are buying and why, please subscribe to The Gold Prices Newsletter, completely FREE of charge. Simply click here and enter your email address.

For those readers who are also interested in the silver bull market that is currently unfolding, you may want to subscribe to our Free Silver Prices Newsletter.

For those readers who are also interested in the nuclear power sector that is currently coming back to life, you may want to subscribe to our Free Uranium Stocks Newsletter.