In the Bastion of Capitalism – 50% get something for nothing 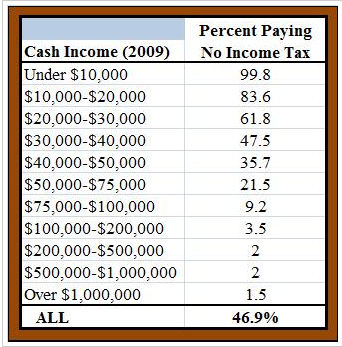 WASHINGTON (AP) — “Tax Day is a dreaded deadline for millions, but for nearly half of U.S. households it’s simply somebody else’s problem. About 47 percent will pay no federal income taxes at all for 2009 (see chart above, data here). Either their incomes were too low, or they qualified for enough credits, deductions and exemptions to eliminate their liability. That’s according to projections by the Tax Policy Center.

In recent years, credits for low- and middle-income families have grown so much that a family of four making as much as $50,000 will owe no federal income tax for 2009, as long as there are two children younger than 17.

Tax cuts enacted in the past decade have been generous to wealthy taxpayers, too, making them a target for President Barack Obama and Democrats in Congress. Less noticed were tax cuts for low- and middle-income families, which were expanded when Obama signed the massive economic recovery package last year. The result is a tax system that exempts almost half the country from paying for programs that benefit everyone, including national defense, public safety, infrastructure and education. It is a system in which the top 10 percent of earners — households making an average of $366,400 in 2006 — paid about 73 percent of the income taxes collected by the federal government.

The bottom 40 percent, on average, make a profit from the federal income tax, meaning they get more money in tax credits than they would otherwise owe in taxes. For those people, the government sends them a payment. “We have 50 percent of people who are getting something for nothing,” said Curtis Dubay, senior tax policy analyst at the Heritage Foundation.”