400 + Point Days are Bearish, Not Bullish 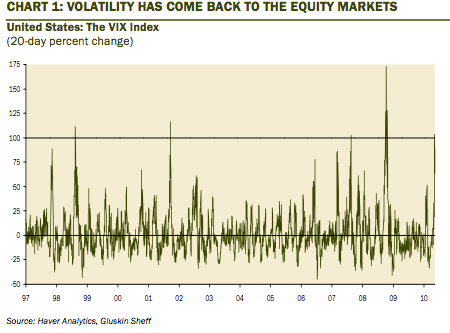 We said last week, and again earlier this week, that the behaviour of the VIX index has recently been consistent with either the tail end of a bull market in equities or the onset of a new bear phase. Indeed, a cursory glance of the market internals — divergences, put-to-call ratio, investor sentiment, the new high-low list — strongly suggest that the first move above 1,200 on the S&P 500 in January resembled the break above 1,500 in July 2007, and the next blowoff move through 1,200, again in late April, looked like the double peak in October 2007. The obvious question is: how can the bull market possibly be over considering that we enjoyed that amazing 405-point rally on the Dow just three days ago (Monday, May 10)? Wasn’t that an exclamation mark that the bull is alive and well?

Far from it. There have been no fewer than 16 such rallies of 400 points or more in the past, and 12 of them occurred during the brutal burst of the credit bubble and the other four took place around the tech wreck a decade ago.

In other words, the most valuable information contained in last week’s intense volatility, underscored by the 400-plus point bounce in the Dow, is that it’s time to take chips off the table and brace for the breakdown.