US Dollar Breaks Through! 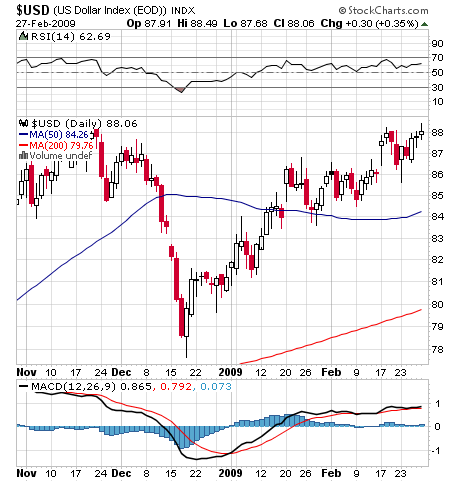 “Hey buddy, can you spare a dime?”

W.C. Fields is quoted as saying:

“Sorry, son, all my money is tied up in currency.â€ Do we have a dollar breakout or fake out in the making? It depends on the euro here.

problems.  Why should they?  Oh yeah, I keep forgetting, it is a â€œunionâ€ of European

test of the system since the introduction of the euro.  We didnâ€™t think it would fair very

well.  And we have not been disappointed.  Not to wish ill on Europeâ€”we really donâ€™t.

And we hope the budding eastern and central European democracies can weather this,

dwell in an Orwellianâ€hellâ€hole called the USSR.

But we continue to believe a viable monetary system must have political cohesion,

besides synchronized business cycles; neither seemed to be present to any lasting

degree within the European Monetary System (ERM).  And any modicum of political

cohesion may have just left the station.

Though we could see the ERM muddle through, maybe due in part to the massive

problems of its competitors, it is a dangerous time indeed for the ERM.

for the eastern and central European countries, maybe this problem of massive loan

reappear in those struggling countries.

None of what we pen here is new or original.  There has been concern in the market

about the euro for many years.  Below is an excerpt from an interview with Milton

Friedman by Radio Australia back in July 1998, before the official introduction of said

could I just take the opportunity to ask you

what you think the prospects are for the

attempts in Europe to create a common

currency area? Are you optimistic about

I think it’s a big gamble and I’m not

does not have the features that are required

for a common currency area. A common

currency area is a very good thing under

some circumstances, but not necessarily

under others. The United States is a common

currency area. The characteristics that make

Australia and the United States favourable

for a common currency are that the

populations all speak the same language or

some approximation to it; there’s free

movement of people from one part of the

country to the other part, so there’s

considerable mobility; and there’s a good

deal of flexibility in prices and to some

government which is large relative to the

local state governments so that if some

special circumstances affect one part of the

country adversely, there will be flows of

funds from the centre which will tend to

If you look at the situation in the Common

Market, it has none of those features. You

have countries with people all of whom speak

mobility of people from one part of the

Common Market to another. The local

governments are very large compared to the

central government in Brussels. Prices and

wages are subject to all sorts of

The exchange rates between different

currencies provided a mechanism for

adjusting to shocks and economic events

differently. In establishing the common

currency area, the Euro, the separate

countries are essentially throwing away this

adjustment mechanism. What will substitute

Perhaps they will be lucky. It may be that

events, as they turn out in the next 10 or

20 years, will be common to all the

countries; there will be no shocks, no

economic developments that affect the

different parts of the Euro area

asymmetrically. In that case, they’ll get

along fine and perhaps the separate

countries will gradually loosen up their

arrangements, get rid of some of their

restrictions and open up so that they’re

On the other hand, the more likely

possibility is that there will be asymmetric

shocks hitting the different countries. That

will mean that the only adjustment mechanism

they have to meet that with is fiscal and

rices. They have no way out. With a

currency board, there is always the ultimate

alternative that you can break the currency

board. Hong Kong can dismantle its currency

board tomorrow if it wants to. It doesn’t

want to and I don’t think it will. But it

could. But with the Euro, there is no escape

Suppose things go badly and Italy is in

trouble, how does Italy get out of the Euro

system? It no longer has a lira after

it will be in the self-interest of Australia

and the United States that the Euro area be

successful. But I’m very much concerned that

there’s a lot of uncertainty in prospect

To sum it up: Danger Will Robinson! Danger!!