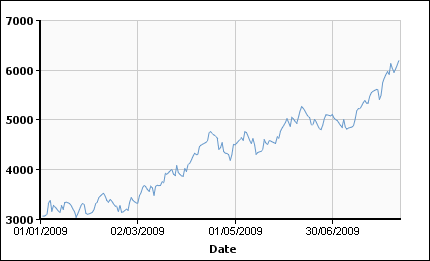 The red metal is red hot: copper has gained almost 80% this year and has eclipsed the $6,000 per tonne level last seen in September. A revival in global risk appetite has helped, but the main driver has been China, where imports have been running at twice the levels seen when Chinese GDP was rocketing in 2007 and 2008, says Capital Economics.

In June imports reached a fresh record high, up 400% year-on-year. But “this is only sustainable if there has been an implausibly large and rapid increase in the commodity-intensity of economic activity”. Instead, the government has been stockpiling commodities in the wake of the price slide last year.

But that can’t go on forever and, indeed, the trend seems to be weakening. Japan’s second-largest smelter, Sumitomo Metal Mining, says Chinese imports are now slowing. What’s more, there certainly hasn’t been a “dramatic improvement” in demand, as Sumitomo’s Koichi Kaku points out.

The International Copper Study Group says imports of refined copper grew by an annual 119% in the first half but production of semi-processed copper goods, an indicator of actual usage, expanded by a mere 1.3% in the same timeframe. Note too that Chinese growth won’t make up for lacklustre demand elsewhere in the world, says Michael Pento of Delta Global Advisors. Given all this, the price of copper is set to “come down to match reality”. (Posted in MoneyWeek.com)

Ed Note: Huge effect on Copper stocks too. See below

.75 to $3.00 – Capstone Mining Corp. (CS.TO) is a publicly traded Canadian mining company with a primary focus to operate, expand and explore the company’s two producing Copper mines; the 100% owned Cozamin copper-silver-zinc-lead mine located in Zacatecas State, Mexico and the 100% owned Minto copper-gold mine in the Yukon, Canada. $20’s to $60+ Worlds largest Publicly Traded Copper Company Freeport McMoran (FCX) has a dynamic portfolio of operating, expansion and growth projects in the copper industry and is the world’s largest producer of molybdenum. The company’s portfolio of assets includes the Grasberg mining complex, the world’s largest copper and gold mine in terms of recoverable reserves.