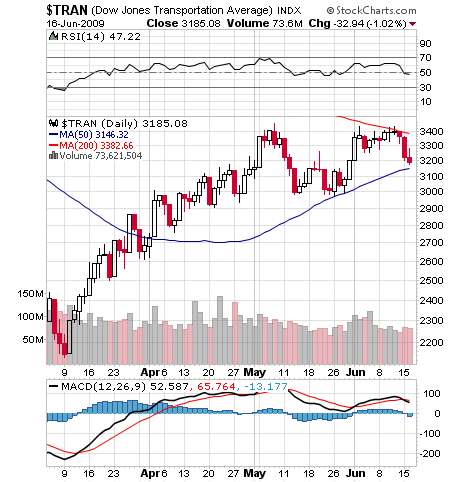 Question — Russell, I still have trouble believing that the Transports non-confirmation can bring on this trouble you’re warning about. On June 11, the Transports failed by a lousy 5 points to confirm. How could that little five point “miss” be so meaningful?

You’re standing in the middle of the railroad tracks and the train is heading for you at 60 MPH. You don’t stand there and try to figure whether the train is the Midnight Special or the Wabash Cannonball, you just get the hell off the tracks. That always works even though you don’t know the name of the train. In fact, if will save your life.
Partial comment from the lengthy daily comment by Richard Russell of Dow theory Letters. One of the best values anywhere in the financial world at only a $300 subscription to get his report daily for a year. HERE to subscribe.

“a bull market in industrials could not occur unless the railway average rallied as well, usually first. According to this logic, if manufacturers’ profits are rising, it follows that they are producing more. If they produce more, then they have to ship more goods to consumers. Hence, if an investor is looking for signs of health in manufacturers, he or she should look at the performance of the companies that ship the output of them to market, the railroads. The two averages should be moving in the same direction. When the performance of the averages diverge, it is a warning that change is in the air.”

Russell Warning — I read the predictions of the members of Barron’s Roundtable over the weekend, and the one area of agreement among the experts seemed to be this — the March 9 lows will hold, no matter what.

Wrong. With today’s action taking the Transports to new lows for the move, I’m of the opinion that this bear market rally is in the process of topping out. When a counter-trend rally tops out within an ongoing primary bear market, the odds are that the stock market will break to new lows during the period ahead. That means that the stock market will break below its March 9 lows in coming weeks. A violation of the March 9 lows would be a shocker to most investors, and it would be a forecast of an even worse economy coming up.

Conclusion — the Obama administration will have spent trillions of dollars to no avail. Meanwhile, the bear market will continue as the economy heads even lower with deflation heating up.

Russell note –– Once traders see that this rally is unraveling, there’s going to be a RUSH by traders to get out of this market. In 1921 Hamilton wrote, “One of Wall Street’s old maximums was, ‘Never sell a dull market.’ Rallies in a bear market are sharp, but experienced traders wisely put out their shorts again when the market becomes dull after a recovery.” Russell comment — This may be what’s happening now. Very brief excerpt below from Mark Leibovit’s extensive morning VR Silver Newsletter which includes detailed reports and recommendations on Stocks, Gold, Bonds, Crude Oil, US Dollar, TSE Uranium and TSE Venture – – HERE for a trial Subscription, a great value. Much more timely and detailed advice on stocks in this letter.

“The Transportation stocks continued their underperformance yesterday as the weak manufacturing report weighs on industrials and those shipping their products. The Dow Jones Transportation Index declined 143.40 or 4.27% to 3218.02.

The Transports briefly moved above its 200 day moving average last Thursday, but this was more the result of a falling moving average than the rising index, and we have now fallen sharply since then. Again, we get no follow through on these bullish breakouts, a very worrying sign.

As I’ve mentioned before, the Transports are getting double hit by the weak economy and high oil prices. I am not sure how much the market has priced in the higher oil prices. Earnings in the first quarter were only partially affected by the higher cost of doing business, but second quarter earnings could see some disappointing results.”

Chart from Don Vailoux indicates the timing not good for a Dow Theory non-confirmation: