Thoughts on Crude Oil and a six to twelve month target…. 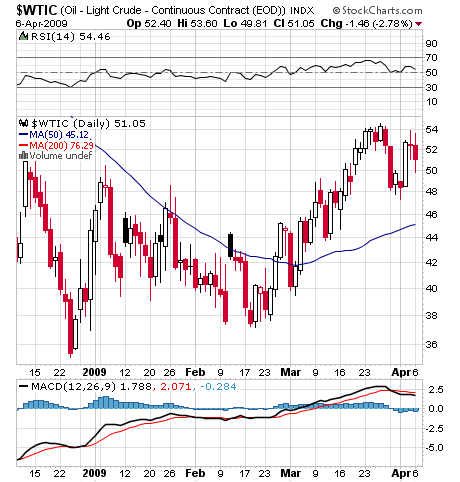 You should be a buyer on weakness. Crude oil looks like its breaking out of its recent trading range. It should eventually (six to twelve months) push higher with potential even to 70! I’ve been telling you this for a while! A retracement in Crude anywhere from the low to mid to low 40s should present a buying opportunity.

The stock market and oil continue to trade together, as they have since the stock market’s March low. Crude oil closed down 1.46 to 51.05.

Last Wednesday morning when oil was trading at 48, I wrote: “Oil is getting hit this morning by the inventory report. The inventory report was not so bad, but the market may be concentrating on the decline in demand instead of the headline inventory numbers. But with the stock market recovering now and showing solid gains, oil could reverse course as well if the stock market rally continues.” That is exactly what happened. Platinum subscribers made money when we recommended buying an oil ETF, which we have subsequently sold for a nice profit.

Oil and the stock market are currently trading together. However, oil hit bottom and started rallying in mid-February, whereas the stock market started to rally in early March. Oil may have become a leading indicator for the stock market, similar to the Transportation index.