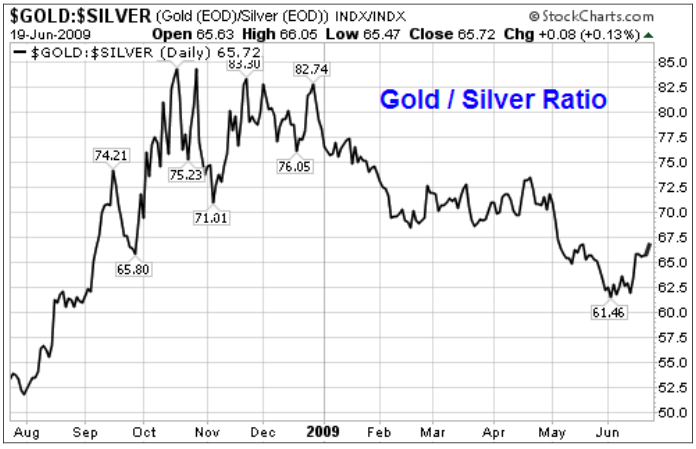 • The June 11 Pivot included the following on the gold/silver ratio:  The reversal to rising will signal the resumption of credit troubles, when silver could again do some big plunges relative to gold.”

• On the expected decline, the momentum became enough to end the move and getting above the 66 level would lock in the trend change.

• Thursday’s Pivot noted that this was getting close and that getting above 68 would be very concerning – the old signal anticipating another disaster.

• At noon (NY time) this reached 66 and the popular hit by Nat King Cole, “Get Your Kicks on Rout Sixty-Six” includes: “Get hip to this timely tip”

• The accompanying chart shows the action to today’s close (Ed note 06/19), and Kitco provides a constant calculation under the tab “All Metal Quotes”. (Ed note June 22/2009) – At times, the gold/silver ratio behaves somewhat like a credit spread, and over more than three centuries when it turns up in a maturing speculative climate the action is close to failing. This appears to be the case today and as this memo is completed the ratio is at 67.3 and well into “danger” territory. Aggressive selling of most speculative plays is the natural thing to do. Why such a reliable relation is not included as a guide to policymaking, or in modern portfolio theory is beyond comprehension. • Kitco.com:  under “All Metal Quotes”

• The reversal in the ratio confirms the probability that the credit contraction would resume by mid-year.

At a MoneyTalks Conference in Nov. 2007, Independent analyst Bob Hoye of Institutional Investors warned that a contraction of credit would reap havoc with all financial assets. Bob Hoye warned again at the World Outlook Conference on Feb. 2008 when he said, “We are experiencing the beginning of the greatest train wreck in the history of credit.”

Read more about Bob Hoye at his Institutional Advisers website. To register for a FREE TRIAL go HERE