There is something happening – and its not just in Gold… 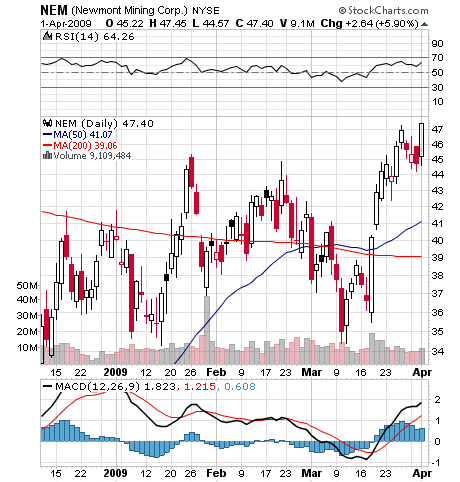 Partial comment from the lengthy daily comment by Richard Russell of Dow theory Letters. One of the best values anywhere in the financial world at only a $300 subscription to get his report daily for a year. CLICK HERE to subscribe

As the sheer amount of Federal Reserve Notes multiplies, gold should normally rise. Yet, someone or some group is putting pressure on gold. Hmm, come to think of it, the last thing the Fed wants is surging gold, a signal to the world that the dollar is being devalued. Ah, the things that go on behind our backs. Chart below compares the relative performance of  $GOLD, NEM and $HUI. The 84 yr. old writes a market comment daily since the internet age began.  In recent years, he strongly advocated buying gold coins in the late 1990’s and 2000 below $300. His position before the recent crash was cash and gold.
There is little in markets he has not seen.  Mr. Russell gained wide recognition via a series of over 30 Dow Theory and technical articles that he wrote for Barron’s during the late-’50s through the ’90s. Russell was the first (in 1960) to recommend gold stocks. He called the top of the 1949-’66 bull market. And almost to the day he called the bottom of the great 1972-’74 bear market, and the beginning of the great bull market which started in December 1974. He loaded up on bonds in the early 80’s when US Treasuries where yielding 18%.
The above is a partial comment from the lengthy daily comment Richard Russell writes. One of the best values anywhere in the financial world at only a $300 subscription to get his report daily for a year.  HERE to learn more and HERE to subscribe online.