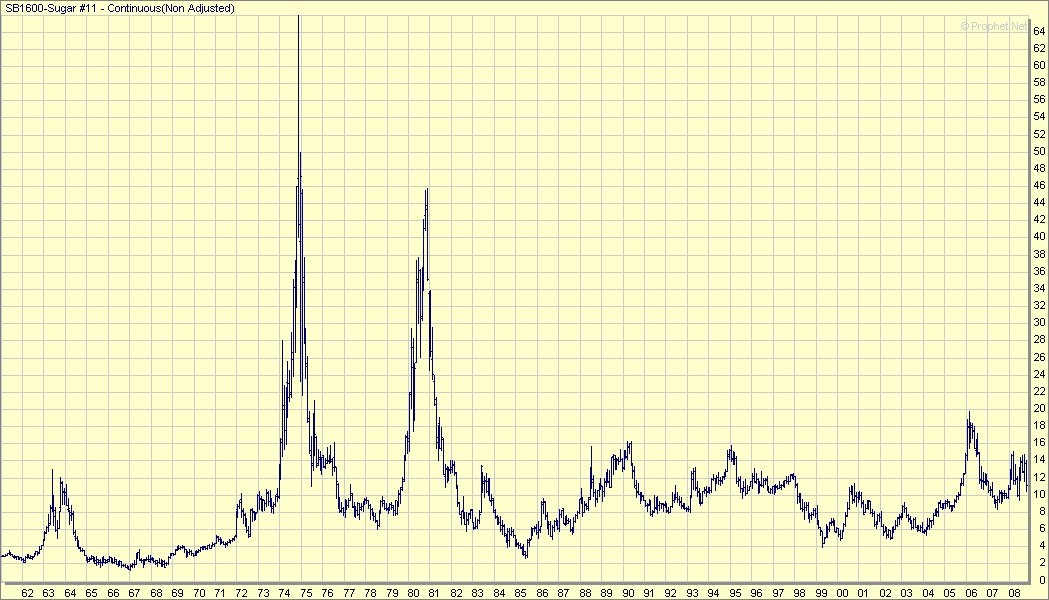 Investment Guru Jim Rogers said that while he saw a pause in commodity prices, the long-term uptrend remains intact.

Food inventories were at their lowest in decades, Rogers said in an exclusive interview to CNBC-TV18. Sugar prices would continue to head higher, he said, as the demand remained high.

Rogers also spoke on the Chinese market and said it would continue to grow in the near future. “I have not sold my Chinese holdings despite the market fall,” he said. The Chinese economy has continued to do extremely well as they had enough reserves, he added.

Q: What is your sense of the China scare over the last few days? On atleast a couple of occasions in the last ten days that market has gone down 4-5% in a single session and there has been so much talk about overheating and a bubble like situation, are those concerns justified in your eyes?

A: The Chinese market is doubled between October-November and now so any market that doubles in ten months should slow down, should have a rest. I don’t pay too much attention to day-to-day or even week-to-week fluctuations. I am watching China, China is still going to continue to grow during the future and I haven’t sold anything in China.

Q: How do you read the regional data which is coming in now? Yesterday you saw the Singapore gross domestic product (GDP) numbers which were quite a big improvement quarter-on-quarter (QoQ). Sitting there do you get a sense that things are definitely on the uptick?

A: You certainly see that things are better but last year everything just stopped especially at this time of year August-November last year, everything just stopped. People didn’t know what is rice or beans or anything else. Now if nothing else, if you run out of rice and you have to order some of the rice or some of the beans, things look better, things are better, they look better, government is spending huge amounts of money, so the people getting the money think things are better and they feel better.
Is it going to last? I would suspect not. I am sure we will have more problems again and again in 2010-2011 because this is just papering over the problems, it is not solving the problems.

Q: To go back to China for a second, the Chinese industrial data at more than 10% continues to be robust but there is a lot of concern about whether there has been overlending by the Chinese financial institutions and whether they might start to tighten now for the rest of the year. Do you think those concerns are overblown or legitimate?

A: I don’t pay too much attention to government figures. I know the US government lies, I presume that most governments just try to make things look as good as possible. So I suspect that is what is happening in China and elsewhere as well.
However, the Chinese saved up a lot of money for a rainy day, now it is raining and they are starting to spend some of that money. So some parts of the Chinese economy will continue to do extremely well no matter what happens in the rest of the world.
Places that deal with the US or Europe, retailers for instance, are suffering and will continue to suffer. There was a lot of lending and some of that money apparently has been going into real estate, property and the stock market which is not good ofcourse but some of the growth in China is certainly legitimate because they are spending a lot of money.

Q: The commodity market got a bit worried after a dream run because of the Chinese market correction. Do you see commodities or the hard commodities like copper etc extending their gains even from here or do you think it is time for a pause there?
A: Some commodities obviously will have to pause others will continue to rise nothing goes straight up, every day, every week, every month. Oil markets – as you know better than most – do have corrections along the way, some are overdue. But as far as I can see, the only sector of the world economy where the fundamentals are improving are commodities. Many farmers cannot get loans for fertilisers even though agricultural inventories are the lowest in decades. Nobody can get a loan to open a mine; it takes ten years to open a mine, so mine reserves continue to decline. So the fundamentals for commodities continue to improve and that is the best place to invest.

Q: What about something like sugar which has become the talking point across global markets hitting a 28 year high? Do you see those gains being extended looking at the demand-supply situation in sugar?

A: I certainly do. Sugar –even though it is at a 28 year highs, you would probably know it is down 70% from its all time high. So sugar is still very depressed on any kind of historic basis and I suspect it will go higher. The last time we had a bull market in sugar in 70s, if you would remember there was no biofuel – that is a huge new element of demand now and most of Asia was not involved in the sugar market in any big way back in the 70s. But now Asia is prospering and there are 3 billion people trying to have a better life and most people when they get more prosperous, use more sweets. So you have big elements of demand in sugar now that you did not have in the last bull market. I wouldn’t sell sugar, I don’t know if it is going to go up in the next week or the next month but I am certainly expecting sugar to go much higher during the course of the bull market over the next several years. Q: In any case many agro commodity prices are going up in India because of a bad monsoon this time around. What is your perspective of the softer commodities, do you think they could be headed significantly higher – the agricommodities – over the course of the next one year?

A: I am not a weather man so I cannot answer the weather problems. As I said food inventories are at the lowest they have been in decades – not lowest in months or years but in decades. There is a very good chance that we are going very serious explosions in the price of food because we may have no food at any price if we continue to have weather problems. Yes you are having some monsoon problems in India but the rest of the world still hasn’t had bad weather. If we start having serious weather problems around the world as we have had many times in history, the price of food is going to skyrocket because there are no inventories and there is no productive capacity.

Q: Give us a word on real estate. Have you seen a significant improvement in sentiment towards real estate in the entire region and would you be a buyer of real estate once again after the dip it saw six-nine months back?

A: You are certainly seeing prices go up – I am told prices in China are back to where they were before the big drop. I certainly see prices or more transactions here in Singapore and other parts of Asia – I am not jumping in, I would not be a buyer unless it is specialized real estate if it is in the right location or if it is farm real estate something that is to do with farming or mining. Surely, out of mining area you will make a lot of money. But when interest rates go higher again which they will have to in the next year or two or three, property is going to suffer once again because there is still massive speculation in most property markets.