One heck of a Rally – the big players 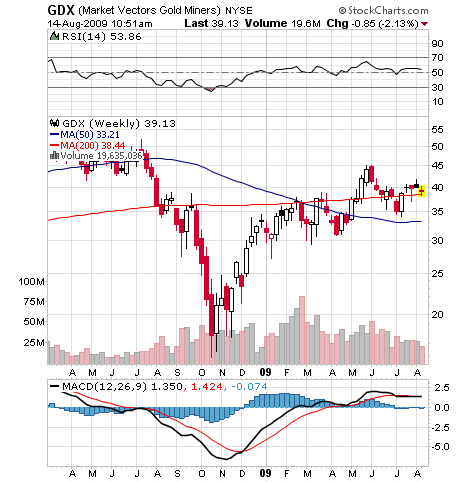 Some brief excerpts below from Mark Leibovit’s extensive morning VR Silver Newsletter which includes detailed reports and recommendations on Stocks, Gold, Bonds, Crude Oil, US Dollar, TSE Uranium and TSE Venture – – HERE for a trial Subscription, a great value. Much more timely and detailed advice on stocks in this letter.

“Metals and mining ETFs were the big players yesterday. GDX (Market Vector Gold Miners ETF) was up 2.81%, while SLV (Silver ETF) was up 3.14%. Base metals also saw a lot of demand as JJN (Nickel ETF) was up 3.99% and DBB (Base Metals ETF) was up 3.72%. XLB (Basic Materials) also put in a strong performance, gaining 1.83%. Could all of this commodity related activity be forecasting another break lower in the dollar? Time will tell. “It is becoming clear that U.S. debt instruments are no longer viewed as the safe haven they once were among foreign investors. Our currency is paying a price for the liquidity flood and debt issuance being created by the Fed and the Obama administration.” Financials posted a solid 2.07% gain after the Fed announced that it will have oversight of CIT Bank.

Semiconductors made a second straight strong showing as SMH gained 2.33%. This bodes well for the Nasdaq’s ability to reclaim leadership of this rally. We will see how it plays out.

The indices remain below last Friday’s highs, but the resilience they are displaying is bullish. Sellers have been unable to wrest control of this market from the buyers, and that means we could be on the verge of another upside breakout to new recovery highs.

A Positive Volume Reversal ™ was formed in DIA and SPY on Wednesday, the ETFs for the Dow Industrials and the S&P 500.

Commodities and economically sensitive areas continue to catch a solid bid which shows demand for equities is alive and well. The bulls remain firmly in control. Even the past week, which was a cyclically bearish period, all we got was sideways action.

(Ed Note: emphasis mine) Folks, there will be a correction, but what we’ve learned since March (recall I flashed an initial TIMER DIGEST ‘Buy Signal’ on March 4) is that this market is clearly climbing a ‘Wall of Worry’ and is being ‘engineered’ higher. It may be one heck of a bear market rally, but what if we’re wrong in that assessment and those who have been pounding the table regarding the likelihood that we’ve seen ‘generational’ lows are indeed right? The answer is that there is no way of knowing, so you have to trade the market whether your timeframe is one week or six months.