On the lookout for a Top 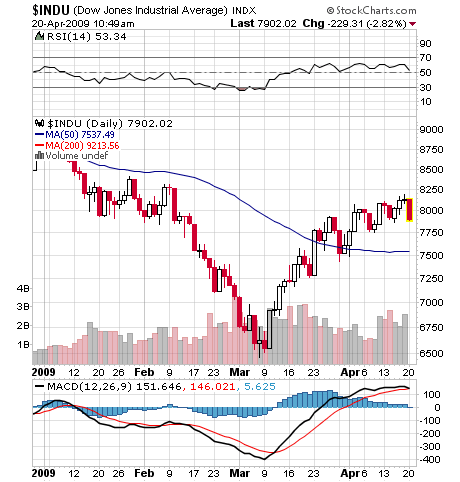 “We are on the lookout for a market top, even if it is only a trading top.

Stepping back, you have to realize that this entire rally is a bull trap. Will the 80 million ‘baby-boomers’ who have seen half their wealth wiped out during the current bear market jump back in on the longside? Hardly. The pros will try and suck them in (again), but it won’t happen this time. The rally is a manipulation orchestrated at the highest levels in an attempt to prevent riots in the streets and calm down the financial markets. Underlying problems still exists and are, frankly, unsolvable when failed strategies continue to be repeated. We’re just delaying the inevitable. Yes, we could see the Dow Industrials at 9500 or 10,000. A half-way retracement of the bear market decline in the Dow Industrials is 10,100. More than likely this is what is occurring. If we do those lofty levels, I suspect you will see them later in the year. Bottom line, we can make hay while the suns shines, but those cumulus-numbus clouds are looming on the horizon and you have know they are the I have written many times about how I am not overly impressed that this market has rallied on good news. Well, we got more “good” news on Friday as GE and Citigroup both beat earnings estimates and consumer sentiment came in above expectations and at its highest level since September. Yet, the market stalled. Is the “good news rally” over? Don’t be fooled: the market remains in an uptrend. But this very likely is a sign that the rally is nearing its end. The debasement of our currency and all currencies (fiat money) will lead to their demise. This is why you own Gold. The short term is a different story. In the past couple of months, Gold has fallen over $144/oz. But remember that Gold rallied $300 from November to February. So the recent decline is normal. What is a little more concerning is the recent slow range-bound trading we’ve been seeing. The lack of action in Gold and recent action, especially on the upside, in the stock market, has caused traders to leave the metals market and return to their equity trading. This of course does not change the long-term prospects for Gold, but could make the action in Gold a little less exciting in the near term.