More Easing on its way and – Bad for the Buck but Stocks? 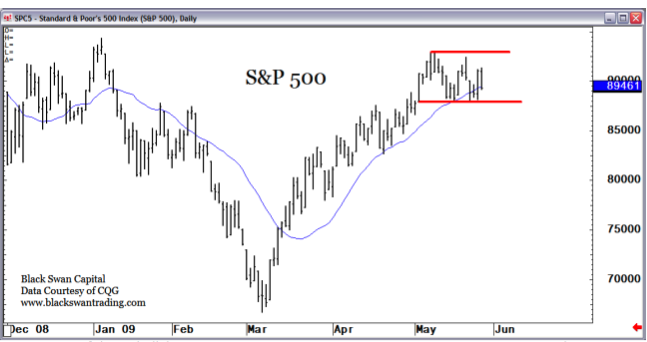 Quotable
“There are two things which cannot be attacked in front: ignorance and narrow – mindedness. They can only be shaken by the simple development of the contrary qualities. They will not bear discussion.” – Lord Acton

FX Trading –  Bring on the Inflation

“Markets are going to increasingly demand that there be some real green shoots” of an economic recovery, said Ethan Harris, co-head of U.S. economic research at Barclays Capital Inc. in New York. “They are going to have to step in at some point and put some more easing in.”

If only it were as certain as Mr. Harris here makes it sound. I figured the demand for real green shoots would have come about by now. It hasn’t.

Granted, the stock market hasn’t hit a new intermediate-term high in what, like 14 days? So maybe this means it’ll start heading lower if these real green shoots don’t start poking out of the ground soon.

Short, sideways price action has become the extent of corrections these days. They’re just consolidations I guess. The S&P 500 is leaving open the potential for a move in either direction – up or down: So what’s up with the dollar? Am I just going to say it’s stuck to stocks; whatever stocks do the dollar will do the opposite?

No. The negative correlation has loosened up between currencies and stocks. Now that risk appetite has taken a breather, the buck has been re-subjected to a different threat. It’s now vulnerable to inevitable inflation.

Despite a small recovery so far this week, this buck has been whacked: Article on the USD written by Jack Crook Saturday March 28, 2009

Seven Stages of the Dollar

It’s always difficult to pinpoint where we are in terms of a trend.  Long-term trends in the currency markets have ranged from six to ten years, measured by the various bull and bear markets in the dollar since the inception of the free-floating currency market back in 1971.  Here’s the pattern of long-term bear and bull markets in the dollar as measured by the US $ Index:

No one can say when multi-year bull and bear markets end without some perspective.  But we can evaluate conditions as they develop that may indicate the potential for a change in the big trend.  I use the boom/bust cycle of price action to help put this longer-term moves into some type of perspective.

The dollar, especially from a longer term perspective, moves in waves—discernable waves based on human emotion and supported to differing degrees by the underlying economic fundamentals at various stages along the way.  It sounds complicated but it’s not. Here’s an example of the waves or stages of the dollar in a boom/bust price cycle…

•    Stage 1: The unrecognized trend – This is the early on stuff.  It represents the beginning of a new trend that is recognized by only a few of the major players.

•    Stage 2: The beginning of a self-reinforcing process – This is the stage where the consensus begins to realize there are real underlying fundamental reasons why this “new” trend has legs.  This is the most powerful and longest leg or wave of the trend.

•    Stage 3: The successful test – This is the pull-back that challenges the consensus view, it represents a significant retrace of the prior wave “self-reinforcing” wave.  In the case of the dollar, the bear market correction we witnessed during 2005 is an example of a “successful test.”

The best recent example was the leg-up in the British pound during the credit-induced bull phase.  It was supported on strong growth in the UK economy and an aggressive Bank of England.  But on a purchasing power parity basis (a key long-term indicator of real value) the pound was extremely “overvalued,” relative to the US dollar.  But that didn’t mean the move was over.  We still have the climax stage before the bull phase ends.

•    Stage 5: The flaw in perceptions – This is the stage in the cycle when some of the major players begin to realize the currency cannot be supported by the fundamentals, as highlighted above.

•    Stage 6: The climax – This is the final stage of the move, and represents the “overshoot” we often see in currency markets because they tend to be more sentiment driven and price-led than other asset markets.

So where are we now in terms of this dollar major bear or bull market?  I think we are late into Stage 1 and Stage 2 as players are starting to recognize the trend change.

The “climax” stage is far away in this new dollar move; when reached you will know it.  That’s when everyone in the world will love the dollar everyday all the time.  Shoeshine boys will be playing the FX market, go long the dollar and making a killing.  That’s when you know we are very close to Stage 7, time to start looking in the other direction.

Our commitment is to deliver well researched trading recommendations that our clients understand and can efficiently execute through their brokers. We outline the reasons to enter a trade and define the risk. But our Members must understand there is a substantial risk of loss trading in forex (off-exchange retail foreign currency) and currency futures markets.

We tell our Members when to enter and exit and why. HERE for more information