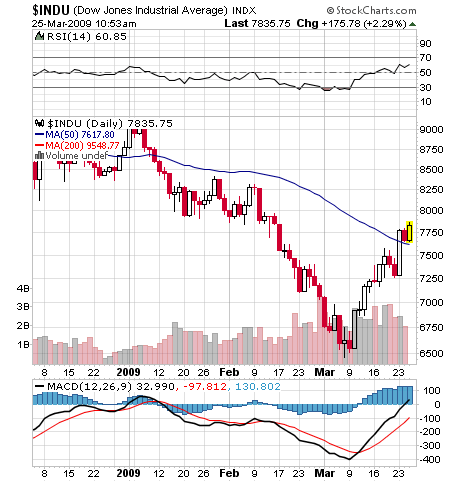 U.S. stocks rallied, capping the market’s steepest two-week gain since 1938, as investors speculated the Obama administration’s plan to rid banks of toxic assets will spur growth and investor Mark Mobius said a new bull market has begun. Treasuries and the dollar fell.
“You have to be careful not to miss the opportunity,” said Mobius, who helps oversee about $20 billion of emerging-market assets as executive chairman at San Mateo, California-based Templeton Asset Management Ltd. “With all the negative news, there is a tendency to hold back,” he said in a Bloomberg Television interview from Hong Kong.

I read and study the work of maybe 15 analysts that I consider the best of the breed. Of the major bulls, I find Joe Granville’s work the most convincing. Writes my old friend Joe in his latest mailing, “The definition of a market bottom is where there is a maximum of new stock lows. That was seen on October 10, 2008, when there were 2901 new lows. So, until proven otherwise by a higher number, the last bear market ended on that day.”

Russell Comment — According to Joe’s thinking, if October 10 was the bear market low, then logically, the market has only one way to go — higher. Joe believes a new bull market started from the October 10 low. That makes sense IF one can identify the bottom of a bear market by the maximum number of new lows. I’m not convinced. I wrote a good deal at the time about the October 10 explosion in new lows. Actually on that day an amazing 92.6% of all the stocks traded on the NYSE hit new lows. I had never seen anything like that before, and I agreed with Joe that October 10 represented the “internal low” for the stock market. I can’t imagine a worse day for new lows, but did that represent the bottom for the bear market? I’m not convinced.

Consider this — on October 10 the Dow closed at 8979.26. But five months later, on March 9, the Dow closed at 6547.05, which was 2432 points lower than it was on October 10. So was October 10 the true low for the bear market? Not according to the D-J Averages or most other major averages. The question — is the low of a bear market identified by a record number of new lows or by the stock averages? My vote is for the Averages, and this is in harmony with Dow Theory.

After considering all the technical arguments, I remain of the opinion that the bear market is still in force, and that the current advance is a correction against the primary trend.