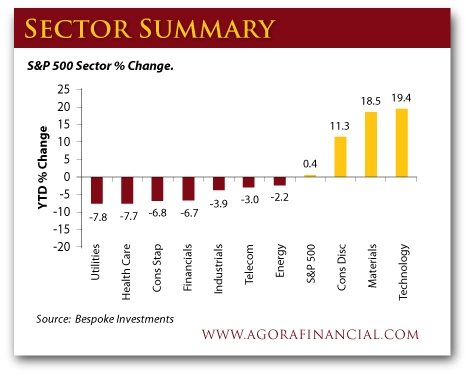 05/05/09 London, England Happy days are here again! Enjoy them while they last…

“Optimism builds,” says a headline in the Financial Times.

As predicted, the world markets are enjoying a bounce. People who had no idea there was anything wrong with the world financial system two years ago, now say the problem has been fixed.

Who fixed it? The people who had no idea what was wrong with it, of course.

What did they fix it with? The same thing that caused the problem they didn’t see – debt.

Who makes sure it won’t break again? The people who didn’t notice the wheels coming off the last time.

The longer these trends go on, the more reasons people will find to believe that it is not just a bounce…but another major boom.

New York-based Economic Cycle Research Institute says, “The U.S. is on the cusp of a growth rate cycle upturn,” the article explains.

Let’s look at whether this optimism is justified.

On the housing front…U.S. houses are down 30% from their highs. The Case-Shiller index of housing prices has fallen for 30 months in a row. Isn’t that enough?

Maybe. The latest data shows more sales – of new, as well as existing houses. And there are more housing starts too. But in the former boomiest states – California, Nevada and Florida – about half the sales are of foreclosed properties. These properties are hitting bargain prices…but pulling down the value of the entire housing stock. And there are still lots of houses to sell. So don’t expect any major turnaround in prices. If prices have hit bottom – which we doubt – gains are likely to be very small…and they’ll come very slowly.

Besides, if the United States is entering the “worst downturn since the Great Recession,” who will have the money to buy a house? But that’s the issue. Maybe the world is not entering a major downturn, after all. Maybe it was just a case of mass hysteria…a panic, like the Y2K bug…or terrorism…or swine flu. Maybe people are now getting over it…and getting back to business, just like they did before.

Consumers are becoming bolder. Consumer confidence measures are about 20% below the baseline metric of 1985…but that’s a big improvement; they had been nearly 40% below the ’85 standard.

There is some evidence that consumers are returning to their bad habits, too. Consumer spending is picking up – at least, that’s what recent numbers from the discount stores show. They’re taking up cheap thrills and necessities again. But luxury shops are still reporting drops of about 20% per year.

Major stock markets have rebounded 20% and more. But the real excitement has come in emerging markets. A few months ago, it looked as though China would be unable to decouple from the developed world. They were stuck, said analysts, like a rusty sink drain. The Middle Kingdom was headed towards recession just like everyone else. But then those clever Chinese seem to have found a wrench big enough to pop the joint. Almost unbelievably, China seems to have pulled off the much desired “V-shaped recovery.” Instead, of contracting, China’s figures show it expanding at a more than 8% rate.

China might be lying, of course. It seems very unlikely to us that China could have recovered so quickly. This is not a recession, we keep saying. It’s a depression. And depressions demand structural changes – the kind that takes time.

Besides, eyewitness reports tell a story that sounds like a cross between “Grapes of Wrath and a repeat of Mao’s Long March.” That is Elliot Wilson’s description after a recent trip into the heartland of the communist giant.

More on this below, but first, we turn to Addison to see what’s driving the S&P rally:

“Ariba! Cinqo de Mayo herald’s big news for the S&P 500 this morning: The S&P 500 is now registering a small gain for the year,” writes Addison in today’s issue of The 5 Min. Forecast.

“But before you down the Cuervo Gold and shimmy onto the parquet for a hat dance… consider this:

“The resurgence in the S&P 500 is being driven by only three sectors: Consumer discretionary, materials, and tech. See for yourself. “It’s hard to believe in a ‘bull market’ when 2/3s of the players are in the red.

“We’re taking a closer look at tech, but for the time being – as if you need another reason to turn off CNBC – healthcare, utilities and consumer staples, the classic refuge for mainstream money managers aren’t such a good choice during this sucker’s rally.”

And back to Bill, with more thoughts:

“Everywhere’s the same. I talk to the concierges of Shanghai’s leading hotels, always men in the know. At the JC Mandarin, occupancy is at 40 percent in early February, against 80% a year ago. At the vast JW Marriott, it’s even worse; just 25%…”

But what the heck? Maybe we’re wrong. Maybe China is already recovering. It may be a structural depression – but only for the developed countries, particularly the United States. Maybe it’s only a recession for China. And maybe it’s over. Seems almost unbelievable…but now, with so many wonders to wonder about we wonder why we bother to wonder at all.

Besides, other developing economies are reporting the same things – increases in exports after a catastrophic collapse at the end of the last year. You can measure the collapse easily just by looking at the Baltic Dry Index – which keeps track of bulk shipping rates. It fell by more than 90% last year. From its low, it’s doubled – up 100%. But that still leaves it down 80% from a year ago.

Stock markets in emerging markets show similar increases. Brazil’s stock market is up almost 90% from its low. South Korean stocks are up 71%. And Chinese stocks – those listed on the Shanghai exchange – have gained 50%.

Apparently, someone thinks the worst is over. Maybe that person is right. But we doubt that this rebound is the sign of a new, healthy boom. Credit expanded for half a century. The Bubble Epoch at its end caused trillions of dollars worth of errors. Many of those errors have already been corrected. But the economy the bubble built remains unreconstructed. Same mismanaged companies…same mismanaged regulators…same mismanaged banks. Exporting nations had gotten into the habit of earning net sales from the U.S.A. of $2 billion per day. Those earnings provided much of the speculative capital that created the Bubble Epoch prices. But that money has all but disappeared. And there’s not much chance that it will return anytime soon.

Instead of a healthy new boom, our guess is that the world is enjoying a sick echo of the old one. Governments, led by the U.S.A., attempt to reinflate the bubble with guarantees and giveaways equal to an entire year’s annual output of the world’s largest economy. Since every penny of this money is borrowed, it makes sense that every penny will have to be withdrawn from the world economy at some point.

In fact, economists are already looking ahead to the moment when deflation fears give way to inflation fears.

“Inflation Nation,” is the title of an editorial in today’s International Herald Tribune. In it, Alan Meltzer argues, “If President Obama and the Fed continue down their current path, we could see a repeat of those dreadful inflation years [the 1970s].”

Professor Meltzer reminds us that cutting off the inflation of the ‘70s wasn’t easy. The feds turned the screws…and let the prime rate go above 21%. Of course, today’s Fed has this information. And Paul Volcker, who was Fed chairman during that period, is now an economic advisor to Barack Obama. Still, “I do not worry about their knowledge or technical expertise,” continues Mr. Meltzer, “What I doubt is the commitment of the administration and the autonomy of the Federal Reserve … Under Bernanke, the Fed has sacrificed its independence and become the monetary arm of the Treasury…”

“The Fed’s job is to take the punch bowl away,” said an Eisenhower era chief. But we have come a long way since the Ike and Dick years. This time, the inflationary party is likely to get out of control, happy days will be here for a while…and then some very sad days are likely.