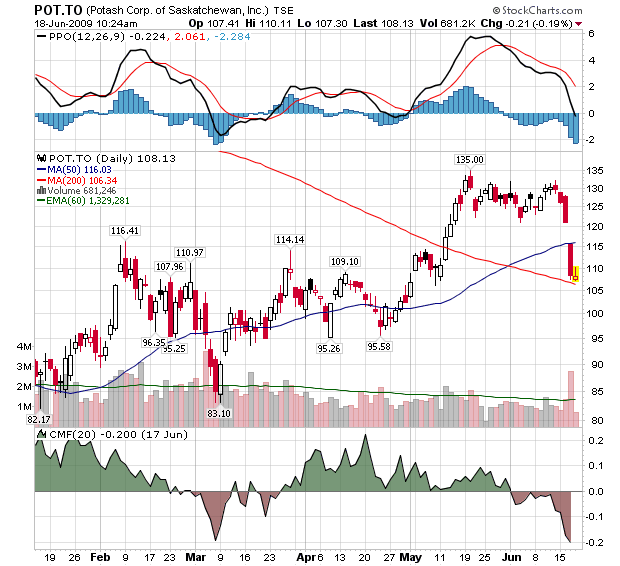 A favourable outlook for grain prices in the second half of 2009 is setting the stage for an interesting seasonal trade this summer.

Seasonal influences
The agriculture sector has a period of seasonal strength from the end of July to the end of December. According to Thackray’s 2009 Investor’s guide, the sector has gained in 11 of the past 14 periods for an average increase per period of 17.4%. Fertilizer stocks such as Potash Corp and Agrium are notable for their seasonal strength during this period.

Fundamental influences
Key influences during the period of seasonal strength are grain prices and taxation. Farmers buy more agricultural products (e.g., fertilizer, tractors) during years when grain prices are high and incomes are above average. The seasonal peak in December is related to additional purchases of agricultural products prior to year-end partially to reduce taxable income.

Current scenario
The stage is set for a significant rally in grain prices in the second half of 2009. Grain prices virtually collapsed from July to October last year, down 40%. Since October, grain prices have moved sideways. Farmers responded by cutting back spending, including a reduction in the purchase and use of fertilizer and a reduction in farm equipment purchases. As a result, grain yields are expected to decline significantly in the current crop year. Lower than expected yields from the Argentine crop this year – partially due to a decline in fertilizer use- is likely to repeat in North America. In addition, weather cooler and wetter than average in North America this spring is raising concerns about this year’s North American crop. Lower yields come at a timewhen demand for grains is growing. The Chinese are a major buyer of soybeans.In addition, the Obama administration is studying the possibility of raising ethanol content in U.S. gasoline from 10% to 15%. More corn will be needed if the proposal becomes law.

Preferred investments for the seasonal trade are Agriculture Exchange Traded Funds and a basket of fertilizer stocks.

Shares in Potash Corporation of Saskatchewan Inc. fell sharply Wednesday after the company said it would cut output by 800,000 tonnes.

The cut raises the total reductions to 4.7 million tonnes this year.

The company said the cut followed “lagging demand due to an extremely slow U.S. spring season and extended negotiations with offshore buyers.”

The cuts announced so far this year are equal to about half of the 2008 total production.

Still, the company said it expects international demand to pick up in the second half. Technical Analysis and comment by the highly respected Don Vialoux of Timing the Market CLICK HERE for more information.