Housing to drop 25-30% – protect yourself, get short stocks 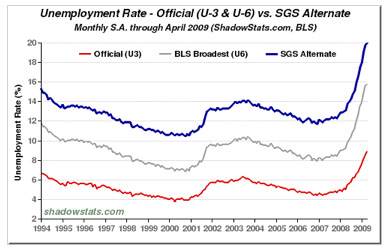 With the financial crisis as hand, we have seen some impressive moves in both stocks and commodities.  Unfortunately for some, these moves are far from over, as we are only within the eye of the hurricane with respect to where we are in the financial crisis. There will be plenty of events to come that will provide profit opportunities for investors positioned properly.

Contrary to the mainstream pundits, housing has not bottomed and probably will not until around 2012. Housing is likely to drop at least another 20 to 30 percent. Builders are currently operating at 25% of normal capacity. With the ever more distressed consumer and rising unemployment, this number is likely to drop to 10% of the formerly 1.7mm new homes per year; building 170,000 homes.

Unemployment has not yet peaked, and probably will not for some time to come. Economist Noriel Roubini, who correctly predicted the onset of the crisis in 2006, estimates that unemployment will remain well above 10% well into 2010. If you believe that government numbers may not fully reflect the situation, this number could be well over 20% as shown in the chart below. It is evident that many US financial and government institutions are having severe financial difficulties. As we move further into the crisis investors should expect extreme actions on the part of the government. The GM bondholders case is a perfect example. As explained by Roger Wiegand,

“We would not, under any circumstances, believe our government would make decisions flying in the face of sacred United States contract law. What they have done to auto company bondholders is to favor unions for political votes forcing bondholders into a lower, non-preferred payment order.  This says corporate contracts in the United States are now meaningless. Auto union people were moved to the head of the bankruptcy line while bondholders with a preferred first lien position by CONTRACT LAW, are now forced to the end of the line.

If your government will do this to auto bondholders, what will they do to the Sheeple?

News this morning told of GM bondholders finally reaching a settlement providing $.17 on the dollar in two parts as GM shares trading was halted. Further news stated GM shareholders are receiving 1% of the deal. Watch for a following clarification as to what all this might mean.”

It is evident that the financial crisis is far from over. Investors who go along with the herd will become victims, much like the GM bondholders. The US banking industry believes that printing money is the solution to all problems. In the end, we may be facing hyperinflation as economist Marc Faber predicted.

There are a variety of things investors might consider if they are looking to protect themselves from the financial crisis. Shorting the US stock market is one of them. The S&P 500 recently rallied 40% off the low hit in March of 2009. Simply buying put options on S & P 500 futures will act as an excellent hedge against current stock positions or for those investors seeking speculative gains. Investors who would like to survive in the current market environment must also be protected against inflation. Central banks around the world are printing trillions of dollars as never seen before in history. Investors now have the opportunity to establish positions in one commodity that will offer the protection needed to survive the likely hyperinflationary depression.

Please feel free to call 312-479-2077 or email me at jared.irish@archerfinancials.com if you would like information on investments that will help you survive the next leg of the financial crisis.