Posted by News Release and commentary 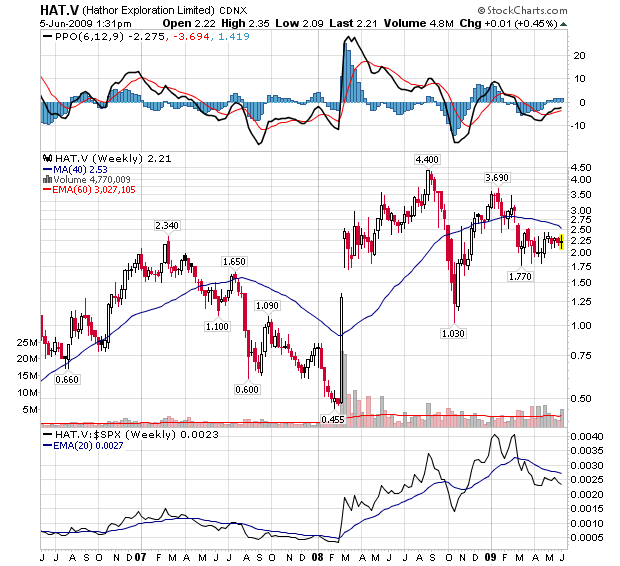 On Hathor – “It’s a great management team, but now the discovery has been made, and the question is now how big the deposit size is and what are the economics—amazing grades the deposit does have. There’s a lot of institutional coverage on it”

“The greatest area with respect to grade, the best real estate in the world for uranium is in the Athabasca Basin in Saskatchewan”. – Marin Katusa – Casey Energy Opportunities VANCOUVER, BRITISH COLUMBIA–(eMediaWorld – June 4, 2009) – Hathor Exploration Limited (HAT:TSX-V) is pleased to announce U3O8 assay results for a further 23 drill holes from the 2009 winter drill program on the Roughrider Zone at its 90%-owned Midwest NorthEast property, northern Saskatchewan. Twenty of these drill holes intersected uranium mineralization (using a 0.05 wt% U3O8 cut-off grade) and high-grade highlights of U3O8 assayed core-length intervals (i) from 7 of these include: The maximum grade intersected in the drill holes reported here is 84.20 wt% U3O8 over 0.50m. Two repeat analyses of this interval returned values of 84.3 and 84.70 wt% U3O8. Dr. Alistair McCready, Hathor’s Senior Project Geologist, said: “We knew that drill hole 116 was going to be impressive from the visual examination, the down hole gamma survey and the high density measurements of core samples (up to 7.6 g/cc). We were, however, not expecting it to return some of the highest grades of uranium ever reported for Athabasca Basin mineralization. This further confirms that the Roughrider Zone may represent the best ever discovery by a junior in the Athabasca Basin.”

During the winter, Hathor completed 30,711 metres of diamond drilling in 89 drill holes from the ice of South McMahon Lake. A full listing of U3O8 assay results, detailed drill collar information (for the entire winter’s drilling), select pictures of altered and uranium-mineralized drill core and scintillometer results (cps values) are available on Hathor’s website: www.hathor.ca. The cps values reported on drill core still to be assayed, from holes on the southwest and northeast sides of the mineralized zone, indicate that the mineralization is open to further extensions along strike.

The successful 2009 winter drill program has:

– Demonstrated that the Roughrider Zone remains open in all dimensions

– Discovered zones of high radioactivity at (+/- 5m) the unconformity

– Intersected the highest grade assay reported from the project to date, to the southwest a 30m step-out, hole DDH MWNE-09-116, which falls slightly short of the record grades from the McArthur River mine, but higher than the best assays reported from the Cigar Lake mine.

A summer drill program is planned to commence shortly, utilizing both barge-based and a land-based drill rigs. These will be used to: further test for strike-length extensions and for potential sandstone-hosted mineralization occurring above the basal unconformity; continue in-fill drilling; and provide material for detailed metallurgical testing. Hathor is fully-funded to carry out this summer work and will be releasing assay data from the remaining drill holes of the winter campaign as they are received and verified.

Samples were analyzed for U3O8 at the Geoanalytical Laboratories of the Saskatchewan Research Council (SRC). The facilities used for the analysis operate in accordance with ISO/IEC 17025:2005 (CAN-P-4E). The samples were analyzed using ISO/IEC 17025:2005-accredited U3O8 method. Laboratory method quality control included the insertion of certified reference materials applicable for the ranges of mineralization encountered. Repeat analyses were performed on every 20th sample. All repeat samples had good reproducibility, including those in the very high grade assay ranges. The very high grade samples were subjected to multiple check analyses. All samples are being analyzed for a suite of other elements including nickel, cobalt, copper and lead.

Benjamin Ainsworth, P.Eng., a qualified person as defined by National Instrument 43-101, has reviewed and approved the technical disclosure contained in this news release.