Governments don’t want to lose control of the printing press…. 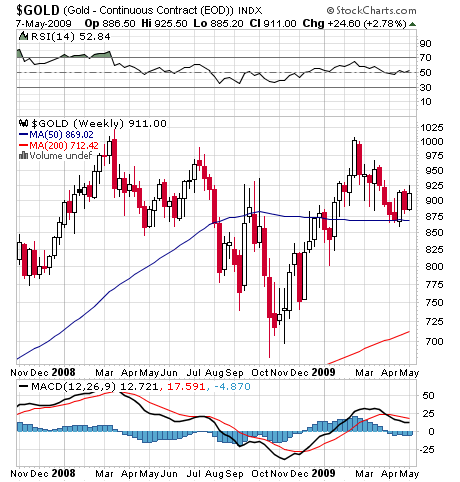 From MarketWatch Article: “But governments don’t want to lose control of the printing press and don’t want a gold standard either, said VRTrader.com’s Leibovit. That is, “unless a plan is underway to peg gold to their currency at a substantially higher price, which would create a huge asset that would act as a counterbalance to their huge national debt,” he said.”

Precious metals were mostly higher after the European Central Bank cut its benchmark interest rate to a record low of 1%, raising worries about global inflation. Gold was down 1.00 to 910.00, giving up modest gains made earlier in the session. Silver was up 0.06 to 13.79 and platinum was up 14 to 1149. Palladium gained 11 to close at 238 and hit a recovery high of 249 yesterday morning.

I continue to recommend accumulating gold bullion. We have been experiencing some weakness recently as speculators close out their “flight to safety” gold positions. If the stock market continues to rally and the economy perks up, we will see the inflation I have been warning about due to the massive printing of money and huge budget deficits, thus lifting gold. If the stock market heads back down and the economy remains in recession, the flight to safety will return and gold will rally. It appears to me that gold will be a long term winner in either situation. But in the short term, gold will just as volatile as usual.

On April 17 Gold double-bottomed (as compared to April 6) at the key 200 day moving average. Additionally, it is very possible that gold is in a descending channel with lower highs and lower lows. That 863.60 low is key support. Should it fail we would very likely see 805 and possibly 743 relatively quickly. We hold gold as a safe-haven asset, a portfolio diversifier, to protest against inflation and, most importantly, to protect against the debasement of our currency and all currencies (fiat money) will lead to their demise. This is why you own Gold. You also own Gold as the ‘tea parties’ in our country are a warning of more trouble ahead both in terms of a financial crisis but also in terms of impending social unrest.