Goldman Sachs – are they evil or just smarter than anyone else…. 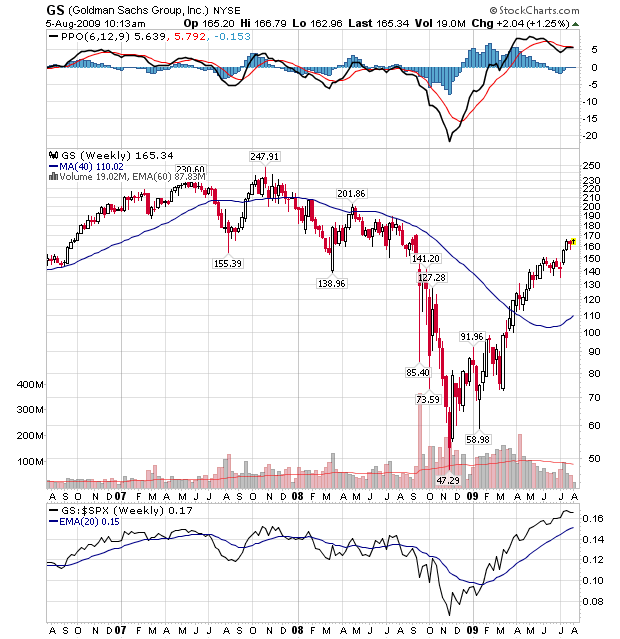 A fraction of the lengthy daily internet comment by Richard Russell of Dow theory Letters. One of the best values anywhere in the financial world at only a $300 subscription to get his report daily for a year. HERE to subscribe.

I’ve been reading a great deal about Goldman Sachs. Are they an evil outfit or are they just smarter than anyone else and willing to take bigger risks? Or do they have their people positioned in the right places? Goldman people have infiltrated the US government. Perhaps the most flagrant Goldman situation was the AIG antic. This from New York magazine. “As it happened Goldman Sachs was AIG’s biggest client, having bought $20 billion in credit-default swaps from the insurer back in 2005. The swaps were meant to offset some real-estate investments Goldman had made, specifically, a bunch of mortgage bonds it had on the books.

“The idea was simple. If the value of the mortgage bonds went down, the value of Goldman’s AIG swaps went up, assuring that Goldman was safe from all-out losses on what it feared was an upcoming collapse in real estate. By that weekend, Goldman had collected $75 billion from its AIG credit-default swaps but had an additional $13 billion at risk — money AIG could no longer pay. In an age in which we’ve become numb to such astronomical figures, it’s easy to forget that $13 billion was a loss that could have destroyed Goldman at that moment.

“Hank Paulson and then — New York Fed chief Tim Geithner called an emergency meeting for the following Monday morning at the Federal Reserve Bank, ostensibly to discuss whether a private banking syndicate could be established to save AIG — one in which Goldman and JPMorgan Chase, two of the ailing insurance giant’s clients, would play prominent roles.

“At the meeting it was hard to discern where concerns over AIG’s collapse ended and concern for Goldman began. The Goldman domination of the meeting might not have raised eyebrows if a private solution had been forthcoming. But on Tuesday, Paulson reversed course and announced that the government would step in and save AIG, spending $85 billion in government money to buy a majority stake. The argument was that AIG was not only too big to fail but too interconnected. Of the $52 billion paid to counter-parties, Goldman was the biggest recipient; $13 billion, the entire balance of its claims.

“Over time, it would appear to many that Goldman had received a backdoor bailout from a Treasury Dept. run by the firm’s former CEO. Why did Paulson bail out the banks that did business with AIG, critics have demanded ever since, and not Lehman Bros?”

Again, “The appearance of a government of Goldman enablers didn’t improve when Stephen Friedman, serving as both a board member at Goldman and Chairman of The Federal Reserve Bank of New York, bought 52,600 shares of Goldman stock while he was supposed to be responsible for the firm’s oversight. Friedman had a temporary waiver saying that he could still act as a Goldman board member, but it was hard to shake the impression that Friedman had sidestepped the rules, particularly since the subsequent rise in Goldman’s share price made him $3 million richer. In May, he resigned from the Fed over the alleged conflict of interest.” Note that he resigned from the Fed, not from Goldman.

Russell Opinion — It’s obvious to me in the AIG case that Goldman was favored to an embarrassing degree. Goldman was saved when AIG was suspiciously saved by former Goldman CEO Hank Paulson. No wonder they call it, “Government Sachs.” When it comes to the biggies on Wall Street, the little guy hasn’t a chance, and Wall Street wants it that way.

Ed Note: If you haven’t read it read Richard Russells declaration that US stocks are now in a Bull Market HERE. The 84 yr. old writes a market comment daily since the internet age began.  In recent years, he strongly advocated buying gold coins in the late 1990’s and 2000 below $300. His position before the recent crash was cash and gold.
There is little in markets he has not seen.  Mr. Russell gained wide recognition via a series of over 30 Dow Theory and technical articles that he wrote for Barron’s during the late-’50s through the ’90s. Russell was the first (in 1960) to recommend gold stocks. He called the top of the 1949-’66 bull market. And almost to the day he called the bottom of the great 1972-’74 bear market, and the beginning of the great bull market which started in December 1974. He loaded up on bonds in the early 80’s when US Treasuries where yielding 18%.