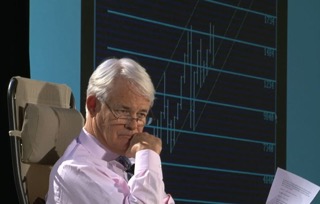 I don’t have a lot of time so let me get straight to the point. Maybe it was a lucky guess – but on Saturday, March 7th, 2009 on MoneyTalks I told the audience that I had turned bullish on the stock market, especially in the US. The Dow Jones was just over 9,000. Since that time I have never wavered in being long term bullish stocks. Not once.

Our target was 30,000 on the Dow, which seemed crazy at the time. At every Outlook Conference since February, 2010 I have reiterated my long term bullish view. As you probably know – the Dow has breached 29,000 for the first time – and that’s why I’m concerned, especially given it has occurred within a few days of the Armstrong Model’s key turning point coming this weekend. I don’t know what the model is pointing to – escalation in Iran, the beginning of the Senate Impeachment trial, or maybe the extradition hearing of Meng Wanzhou – but I have learned over the last 35 years to never ignore those key dates.

In the meantime, until things become clearer, I think it’s never a bad idea to review your current investments and make sure that they reflect your comfortable level of risk. Maybe it’s time to adjust your holdings. (Not a surprise recommendation coming from someone who’s number one rule of investing is to manage risk.) I’ll have a clearer picture of what’s coming by the time the World Financial Outlook Conference starts on February 7th. Better still, I’ll ask Martin Armstrong, the world’s top economic and financial forecaster, who will join us along with Mark Leibovit who was just named Timers Digest Timer of the Year.

The Best Part About Investing

There are a great many differing opinions about the markets. And just as many approaches and methodologies used to determine what to buy, when to sell etc. The good news is that you don’t have to guess whether one particular approach is better than another – you just look at the track record. That’s what I love about the markets – there’s always a scorecard. In the end there’s no BS, no stories, no excuses – just results.

And the results of our recommendations at the World Outlook Financial Conference speak for themselves. For the eleventh consecutive year, thanks to the expertise of Ryan Irvine and Aaron Dunn at Keystone Financial, our official WOFC Small Cap Portfolio has yielded double digit returns.

That’s a terrific return on the $159 ticket.

Of course past performance is not a guarantee of future results, but featuring analysts with exceptional track records like Martin Armstrong, Ryan Irvine, Mark Leibovit and BT Global’s Paul Beattie puts the odds in our favour.

On real estate Ozzie Jurock’s record at the World Outlook Financial Conference on when and where to buy real estate is spectacular and this year he has three new areas that you should be aware of.

As you probably guessed, I want you to come to the 2020 World Outlook Financial Conference. Why? Because we’re living in a time of historic change and people who don’t understand what’s going on are going to be financial road kill. Of course, many people already are – but conference attendees who followed our past recommendations into the US dollar, US stocks, real estate in Vancouver, Phoenix, Montreal and Victoria, and have bought the World Outlook Small Cap Portfolio have done well.

I also understand that not everyone is interested in their personal finances – and I respect that but I’ll warn you that whether you’re interested or not – what’s coming during the next two years will have a dramatic impact on your financial well being.

PS – The World Outlook Financial Conference is Friday, Feb 7th and Saturday, Feb. 8th at the Westin Bayshore Hotel in Vancouver. For more information and to buy tickets click on the EVENTS button