Updated – Capital fleeing the US to Canada -CDN $ to parity and beyond..heres why 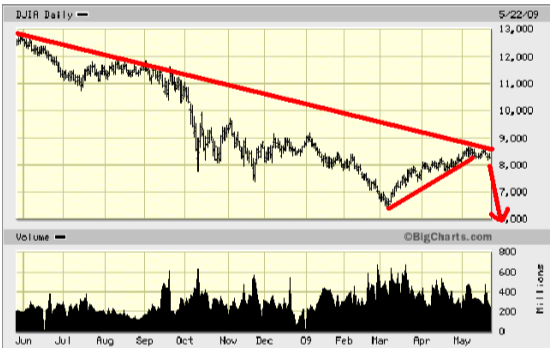 Are New Lows in the Dow Possible?

We really don’t  want to believe that new  lows lie ahead, but we have  to be concerned that they are  indeed possible given the  technical deterioration of the  past two or three weeks.

A break definitively below 8200  would be a very serious  “breach of trust” and would  put the bulls very clearly  upon the defensive and the  bears would begin growling again in earnest. THE DISDAIN FOR THE US DOLLAR
CONTINUES UNABATEDLY

as it has moved materially lower against every one of the currencies in our price matrix listed here each day, save for the Chinese Renminbi. Further, even there the dollar is only stable; certainly it is not strong. There are any number of reasons for the dollar’s continued pummeling but we shall posit that first and foremost is the growing disdain for the Obama Administration’s abrogation of contracts on nearly all fronts. At the moment, however, the dollar came under, and remains under, material pressure when Mr. William Gross of PIMCO said that it seems but a matter of time until the US loses its AAA credit rating. Once that statement was made by an international investor of the renown of Mr. Gross, all bullish dollar bets were off, and all bearish dollar bets were ramped up.

So where is that capital fleeing to? It is fleeing to the places that look most like the US; that have English common law legal systems; that have export and import capabilities, including proper port facilities; that have prosperous, industrious, well educated populations, with sophisticated markets that are well supervised… it is looking for Canada, Australia, New Zealand, the UK et al. Further, it is looking to places like Brazil, where the populations are young and vibrant, and where the administrations are embracing rather than eschewing foreign trade. Hence the C$/US$ rate is making new multi-month highs, on its way to parity once again. Hence the A$/US$ is, like its Canadian cousin, making new multi-month highs, as the world looks upon Australia as the nation most capable of expanding its trade with China’, given its proximity. Hence the world is rushing to Brazil after President’s Hu and “Lula” push ahead with a series of international trade contracts have been signed. Why should capital not move in this manner? To do otherwise would be illogical.

The Gartman Letter is a daily commentary on the global capital markets subscribed to by leading banks, broking firms, hedge funds, mutual funds, energy and grain trading companies around the world.

The Letter each day deals with political, economic and technical circumstances from both a long and short term perspective, and is available to our clients and prospects at approximately 10:30 – 10:45 GMT each business day of the year. Mr Gartman has been producing his commentary on a continuous basis since 1987, and has taught courses on capital markets creation and derivatives for banks, broking firms, governments and central banks all the while.