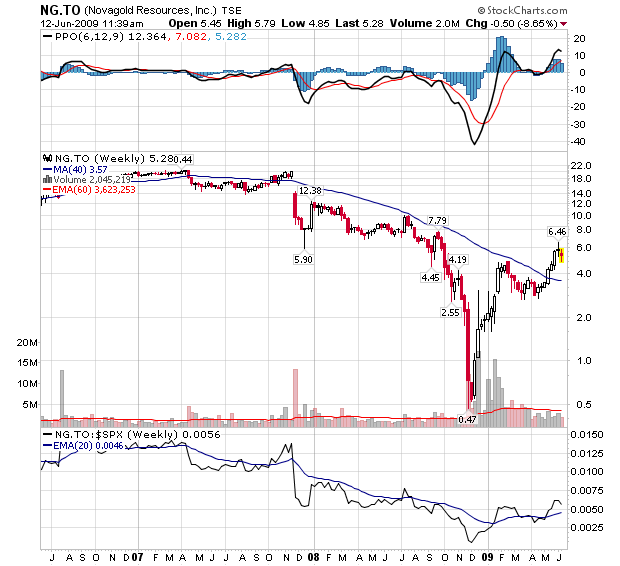 Gold is making another run at $1,000, silver is up even more in percentage terms, and the financial markets are showering the established miners with cash: In February Newmont raised $1.7 billion, while Yamana, Agnico-Eagle, and Kinross Gold have between them raised over $800 million. And last week Goldcorp offered to sell $750 million of convertible bonds, but ended up with $860 million because the offering was oversubscribed.

At the other end of the size spectrum, dozens of junior miners that a year ago were running out of cash and contemplating the end of their dreams are suddenly able to raise enough capital to keep exploring and producing. Here’s a (very) partial list of good news announced in the past few months: • Allied Nevada increased its gold and silver reserves 244% and 298%, respectively, and now projects full mine operation by mid-2009. • Since June 2008 Detour Gold has made a total of nine new gold discovery announcements at its Detour Lake property. • Atna Resources announced that its Pinson joint venture with Barrick Gold “continues to host numerous high grade gold intercepts on a number of structures all located in a relatively small area. We feel that Pinson has a good potential for development due to its gold grade, location in the heart of the northern Nevada gold belt and close proximity to existing autoclave, roaster and mill complexes.” I could keep going, but you get the idea. Lots of juniors, it seems, are about to become mid-tiers — or at least viable producers. But many won’t make it that far. With the majors as a group failing to replace the metal that they’re taking out of the ground and capital suddenly plentiful, the conditions are ripe for a buy-out boom in which the big guys start snapping up the best juniors. Once the party gets going, the question on everyone’s mind will become “who’s next?”, and hot money will send the most likely prospects through the roof.

John Rubino is co-author, with GoldMoney’s James Turk, of The Collapse of the Dollar and How to Profit From It (Doubleday, 2007), and author of How to Profit from the Coming Real Estate Bust (Rodale, 2003) and Main Street, Not Wall Street (Morrow, 1998). After earning a Finance MBA from New York University, he spent the 1980s on Wall Street, as a Eurodollar trader, equity analyst and junk bond analyst. During the 1990s he was a featured columnist with TheStreet.com and a frequent contributor to Individual Investor, Online Investor, and Consumers Digest, among many other publications. He now writes for Fidelity Magazine, CFA, and Proto. Contact: john@dollarcollapse.com