Attn: Canadians – believe in your currency – Canada’s in the Catbird seat 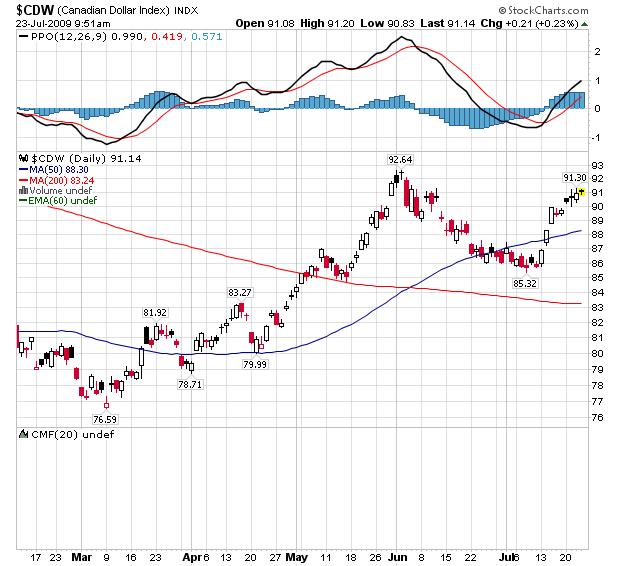 July 22 (Bloomberg) — Canada’s dollar traded near the strongest in more than five weeks as U.S. stocks and crude oil, two of its main drivers, swung between gains and losses.

The loonie, as the currency is called for the aquatic bird on the dollar coin, is the best performer versus the U.S. dollar among the 16 most-traded currencies so far this month. In June it was the laggard. It tends to rise and fall with stocks and commodity prices as a proxy for investors’ appetite for risk.

“Commodity currencies are starting to lose momentum,” said Ian Stannard, a currency strategist in London at BNP Paribas SA, France’s biggest bank. “Caution with long positions is currently the way to play things.” A long position is a bet a currency will rise.

Article by the Legendary Jim Rogers

Below from David Rosenberg of Gluskin Sheff (one of the few economists who saw the crash coming:

WE LIKE THE LOONIE, BUT NOT AT LOONY LEVELS
We are long-term bullish on the Canadian dollar, but at 91 cents, we are near-term cautious.

As an aside, and this comes down to the 91 cent Canadian dollar, we are long- term bullish but near-term cautious.  The key commodity index for the Canadian dollar is NOT the CRB index but rather the Bank of Canada commodity price index and it has lagged due to the fact that some key resource prices that are important to Canada, such as wood products, natural gas and in the farming sector, have lagged behind.  From where commodity prices are today, the CAD should be trading at 82 cents.  On the flip side, from our analysis, the Canadian dollar is trading as if it is discounting a 20% increase in commodity prices from here.  This may in fact happen, but like the equity market, what it means is that there is a lot priced into the loonie at current levels.  Upside is, in a word, limited.

From Dennis Gartman below:

“Finally, we watch somewhat in dismay as the Canadian dollar rises rather smartly relative to the US dollar. We are long of the C$, but we are clearly not long enough.  Convinced that “parity and beyond” is only a matter of time, we bought the C$ two weeks ago when it was trading 1.1485. This morning it is trading 1.0975 and has not corrected even by the barest of corrections along the way. Simply put, we’ve not been given the opportunity to add to this position, and that is what makes us angry, for being right in the markets initially is easy, but one does not make up for one’s myriad idiotic trades by having one good trade. One does so by adding to the good trades. We’ll not add to this position until we’ve had a two or three or four day correction, and that will come when least expected.  All we know at the moment is that few in Canada believe in their own currency, but we do. Canada finds  itself in the virtual “cat-bird seat,” owning the “stuff” such as grain, base metals, energy, water et al that the rest of the world needs…and it holds them in a nation that still holds true to the sanctity of contract; still believes in the rule-of-law; has the infrastructure necessary to export that “stuff” and is willing to do so.” Ed note: the next two charts are a Canadian Dollar  ETF The Gartman Letter is a daily commentary on the global capital markets subscribed to by leading banks, broking firms, hedge funds, mutual funds, energy and grain trading companies around the world.

The Letter each day deals with political, economic and technical circumstances from both a long and short term perspective, and is available to our clients and prospects at approximately 10:30 – 10:45 GMT each business day of the year. Mr Gartman has been producing his commentary on a continuous basis since 1987, and has taught courses on capital markets creation and derivatives for banks, broking firms, governments and central banks all the while.