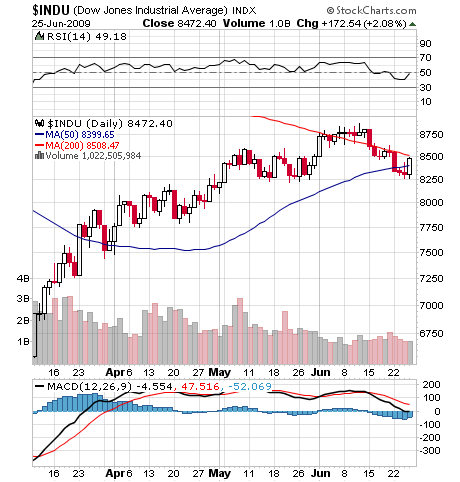 Brief excerpt below from Mark Leibovit’s extensive morning VR Silver Newsletter which includes detailed reports and recommendations on Stocks, Gold, Bonds, Crude Oil, US Dollar, TSE Uranium and TSE Venture – – HERE for a trial Subscription, a great value. Much more timely and detailed advice on stocks in this letter.

The bulls ran once again, aided by end of the month ‘window dressing’ plus good news from consumer discretionary stocks, after better-than-expected earnings from homebuilder Lennar and Bed Bath & Beyond along with the announcement of a new chief executive at Best Buy. For the session, the Dow was up 172.54 at 8472.40, the S&P 500 was up 19.32 at 920.26, and the Nasdaq Composite was up 37.20 at 1829.54. Volume increased on each exchange, and breadth was strong.

The positive tone was supported later in the session by a better than expected treasury auction. Investors also applauded the Fed’s announcement that it would let expire some of the emergency lending programs it set up last fall as the financial crisis intensified.

The market totally ignored yesterday’s worse than expected jobless claims report.
First-time claims for state unemployment benefits rose unexpectedly in the latest week, the Labor Department reported Thursday. The number of initial claims in the week ending June 20 rose 15,000 to 627,000. It’s the highest level since mid-May. The consensus forecast of Wall Street economists was for claims to fall slightly. Claims in the previous week were revised to an increase of 7,000 to 612,000 compared with the initial estimate of a increase of 3,000 to 608,000. A Labor Department official said that some states reported more end-of-school-year claims. Many states allow bus drivers and cafeteria workers to file for unemployment during school breaks. Meanwhile, the number of Americans receiving state jobless benefits held steady rose 29,000 to 6.74 million in the week ending June 13. The four-week moving average of continuing claims fell 3,250 to 6.76 million.

What happened to those news stories that the economy is improving? Jobless claims continue to sit at near record levels. I see no reason to believe the economy is turning around.

The end of quarter phenomenon was in full gear yesterday as portfolio managers are snapping up shares to spruce up their holdings for reporting purposes. This also gives them a chance to juice the market higher and help their own bottom lines.

Gains were broad based as all major sectors logged solid gains. As mentioned above, consumer discretionary stocks led with XLY up 3.49%.

The market yesterday recovered all of Monday’s losses, a good sign. However, one thing to consider is that even with yesterday’s broad based gains, the S&P 500 is tracing out a bearish head & shoulders pattern which projects a drop to 825 if the May lows are taken out. The Dow is showing the same pattern with a potential downside target of 7640. We will be watching closely for either an acceleration of buying, or a failure and a potential break of the May lows. For now we are in a trading range.
Volume Reversal ™ projections currently point the Dow Industrials toward 7400 with first major support at 7900. The S&P 500 is projected to 805 with first major support at 865. If we take out recent highs (SPX 956.23 and 8877.93 DJ), I would consider these projectins invalid.

If, however, we see buyers beginning to make a stand at these support levels on the way down, that is a sign that there is serious money ready to enter this market once again. If that happens. we will be more than willing to get long and ride the next rally phase. Which scenario will win out? We will let the market tell its story.

Overall, however, the decline will likely be a buying opportunity once again, barring the advent of some extraordinary geo-political news. Why? The possibility still exists that sometime before now and early next year the Dow Industrials could finish the 50% upside retracement I’ve been writing about for some time. That level is 10,300 in the Dow Industrials.

The summer doldrums have begun triggered by the powerful Summer Solstice with the expected effect of changing direction for the major markets. Recall, the market bottomed a couple of weeks ahead of the Spring Equinox back in March. These light volume days of summer can allow better capitalized traders to move the market.