8 Reasons to be bullish Gold 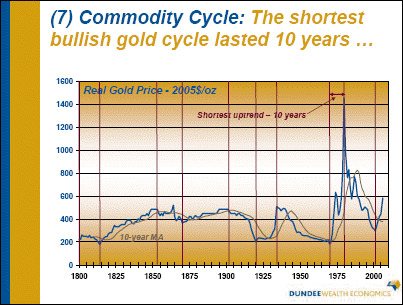 When the title of his speech reads “Reasons to be Bearish on Gold,” Dr. Martin Murenbeeld, chief economist of the Dundee Group of Companies, said he knows his days of speaking at the Denver Gold Forum are over.

So it’s no surprise that the economist and gold analyst took a strong bull stance at the forum in his presentation entitled, “The Outlook for Gold: Reasons to Remain Bullish.”

There are eight reasons to stay bullish on gold in the current economic situation, Murenbeeld said. The first is because monetary reflation is happening due to the liquidity crisis. During a liquidity crisis, the gold price should not actually rise. Any pressure on gold is on the sell side because it is a “liquidity of last resort.”

“Gold is only a liquidity of last resort when it is used,” he said. When it is not sold, it remains stable.

But when the U.S. Federal Reserve gets involved to fight this liquidity crisis with monetary reflation – as it recently did by lowering interest rates – it is “good for gold,” Murenbeeld said, because the U.S. dollar typically declines.

“Obviously you know gold and the U.S. dollar are (inversely) correlated,” he said.

Murenbeeld said that he believes the U.S. dollar is overvalued, while the Chinese Yuan/RMB needs to be re-valued. China holds $1.3 trillion in foreign exchange reserves, which is far too much, he said. The world needs more consumption in Asia rather than these reserves.

“The real change to come has to be in Asia,” Murenbeeld said. “…One day we’ll see the RMB move up sharply.”

These excessive U.S. dollar reserves are his third reason to stay bullish. A shift out of these holdings is likely to happen, Murenbeeld said. Asia holds more than $3 trillion in exchange reserves but “next to nothing” in gold reserves. If the nations would want out of those exchange reserves, “hopefully they turn to gold,” he said.

In addition, the high oil price is making some people rich. These people can be favourable to gold, which means it is possible they will put their money in gold. This is the real relationship between the oil price and the gold price, according to Murenbeeld.

Murenbeeld’s fourth reason to remain bullish is that gold is “cheap,” especially in terms of financial assets. This chart shows the major historic “bubbles” in the S&P Index. “After each bubble, something very dramatic has happened to the gold price,” he said. “In order to deal with the aftermath of the bubble, monetary policy has to remain relatively loose to give gold a kick.”

The fifth reason the gold price is likely to stay strong is because supply is constrained. Global mine output is expected to decline, according to Murenbeeld, because it can take up to 12 years for gold miners to react to high gold prices by increasing output. In addition, the amount of “loose” gold in the Central Banks is modest at 4,047.3 tonnes.

Demand, on the other hand, is increasingly strong. This is Murenbeeld’s sixth reason. Consumer spending on gold has risen worldwide. ETFs are also boosting gold demand due to deregulation in Asia and better distribution systems.

“At any given price, there ought to be demand,” he said.

The seventh reason is that the commodity cycle can last for years, and the current cycle is in a relatively early stage.

The shortest bullish gold cycle lasted for 10 years between 1970 and 1980. “We are currently in a debatable six-and-a-half-year bull cycle,” he said, meaning there is still plenty of time. Even when there is a yearlong setback, that does not mean the cycle is over, according to Murenbeeld.

Murenbeeld’s final reason to remain bullish on gold is because the current geopolitical situation favours gold. The world still has the same kinds of problems as it did during the last gold bull cycle, he said.

Based on these factors, Murenbeeld is predicting a probability-weighted $683 average gold price in 2007. His end-price forecast for 2007 is $754, and looking forward, he is predicting an average of $823 per ounce in 2008.

Gold futures are currently down $4 to $735.30 per ounce on the New York Mercantile Exchange. This could be its first significant correction since early August.

ResourceInvestor.com is a free service to investors, financial professionals and other stakeholders who participate in the mining, drilling and piping sectors.

ResourceInvestor.com was founded in 2004 by Timothy Wood. It subsequently became a subsidiary of Pfingsten Publishing. It is now managed by Futures Magazine, which is a unit of Summit Business Media.