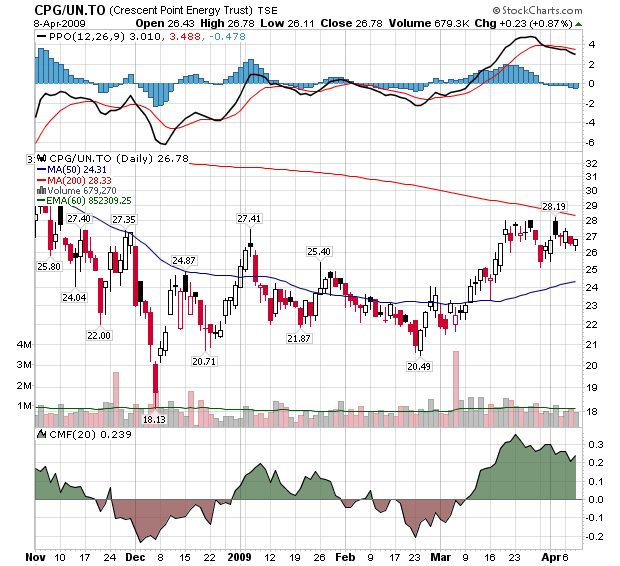 There may be as many as 503 billion barrels of oil in the Bakken Formation that runs under Saskatchewan, Manitoba, North Dakota and Montana.

Genuity’s Brian Kristjansen said the Bakken play and its extensive infrastructure provide “exceptional” economics for Crescent Point. Add in the potential of the Frobisher zone and “these economics improve dramatically,” the analyst said.

Crescent Point recently discovered four uphole Frobisher pods and believes there are many more to be discovered or extended. Kristjansen said this zone is often as productive as the underlying Bakken and the wells are “exceptionally economic” in their own right. The Bakken Formation is a 350 million-year-old underground layer of rock that occurs in much of the Williston Basin, a vaguely heart-shaped warp in the otherwise flat prairies on the U.S.-Canada border. It was discovered in 1953 by a geologist named J.W. Nordquist and named after Henry Bakken, owner of the Montana farm where Nordquist first drilled.

While it was postulated as early as 1974 that the Bakken could contain vast amounts of petroleum, it wasn’t until Denver-based geologist Leigh Price undertook a field assessment for the USGS in 1995 that anybody tried to find out how much was actually there.

His findings were shocking.

That compares with 125 billion barrels at the massive Ghawar field in Saudi Arabia, 7.8 billion at Alberta’s Pembina Cardium and 21.4 billion for the entire U.S. reserves, not including the Bakken.

The problem is that the oil available in the Bakken, however much there may be, is encased in sheets of non-porous shale. Traditional drilling methods yield little usable oil compared to the expense required to retrieve it.

David Bardin, a lawyer who specializes in energy-related issues and who was a deputy administrator of the U.S. Federal Energy Administration under former U.S. president Jimmy Carter, knew of Price and his work. In 1993, Bardin recommended to Hazel O’Leary, then U.S. Secretary of Energy, that the Bakken should be investigated. But when oil prices dropped to $8.50 US in 1997, the U.S. government lost interest and the big oil companies left the area.

As oil prices began to rise again in 2000, Bardin recommended once more that the U.S. government conduct research in the Bakken region. But by that time, a Billings, Montana-based geologist named Dick Findley had already stepped in. And he succeeded almost by mistake.

“He was drilling for oil in Montana at a depth well below the Bakken; he found some, but not enough to be commercially viable,” said Bardin. “But he decided to investigate a bump that his drill hit about halfway down — it was huge, it was the Bakken.”

Findley acquired leases on prime land in the area and worked on ways to retrieve the oil more efficiently. To cope with the flat shape of the deposits, he advocated horizontal drilling. To get the oil out of he rock, he came up with fracturing — pumping sand at high pressure into the well, collapsing the oil-rich rock and allowing the oil to flow back up.

“If I had a contribution, it’s maybe to get people to re-think things,” said Findley. “When you take off the blinders and think big, you start to see pretty big regional accumulations of oil. If geologists think big, they will be able to find some bigger things.”

‘The colour of honey’

And they have been finding big things indeed. The first successful Bakken wells were established in 2000 at the Elm Coulee Oil Field in Richland Country, Mont. Within three years, it doubled Montana’s oil production.

“This Bakken deal is incredible,” said Steve Reger, a geologist associated with the project. He pointed out that an unprecedented 98 per cent of the wells drilled at Elm Coulee have yielded oil. “It’s about the colour of honey and smells sweet.”

Indeed, the quality of the oil is excellent. Bardin notes that, in contrast to that which comes from Alberta’s oil sands, the oil from the Bakken is “liquid and free of water, sulphur and other impurities.”

Elm Coulee was so successful that The Wall Street Journal in 2005 called it the “highest-producing onshore field found in the lower 48 states in the past 56 years.”

And the success has not been limited to the U.S. About a quarter of the Bakken Formation lies in Saskatchewan, and a much smaller portion juts into Manitoba.

The Bakken Formation runs under Saskatchewan and Manitoba. “Production from the Bakken has been stupendous,” said Roy Schneider, spokesman for Saskatchewan Energy and Resources. “As recently as 2004, production was 278,540 barrels; last year, 2007, we were nudging up against five million barrels – the exact figure was 4,965,000 barrels.”

While those numbers aren’t enough to put OPEC out of business any time soon, they have created something of an oil boom in the area.

“Saskatchewan had the hottest housing market in all of Canada last year and looks to be on pace for that again this year,” said Schneider. “And I hear it’s impossible these days to get a hotel room in the southeastern part of the province.”

And while production keeps growing, Schneider says that there are no reliable estimates as to how much oil is actually on the Canadian side of the Bakken.

“We have not estimated an overall reserve figure because the ground is constantly moving beneath our feet,” he said. “We have seen three different estimates in three years of how much oil is down there from the U.S., and each one is higher than the last.”

“Mean undiscovered volumes of 3.65 billion barrels of oil, 1.85 trillion cubic feet of associated/dissolved natural gas and 148 million barrels of natural gas liquids in the Bakken Formation of the Williston Basin Province, Montana and North Dakota,” can be unearthed using current technology, according to the results of a study released by the USGS in April.

A similar study by North Dakota reported that there are about 167 billion barrels of oil under the state, of which 2.1 billion barrels are recoverable with current technology.

Bardin warns people not to take those numbers very seriously – mainly because they could lead to an underestimation of the value of the field. “When the USGS talks about ‘undiscovered volumes,’ they are only estimating the amount that is not already part of proven reserves, so you have to add that to proven reserves,” he said. “Every time you drill new wells, it passes from undiscovered to proven reserves.”

He agrees with Schneider that the USGS keeps upping its estimates as oil prices affect how much of the oil can be recovered economically.

‘About 25 per cent of the Bakken is in Saskatchewan, so it stands to reason that 25 per cent of the oil is too.’
— Roy Schneider, Saskatchewan Energy and Resources
As for the total amount of oil down there, he won’t hazard a guess, but he did note that when Price estimated between 271 billion and 503 billion barrels, he didn’t include Canada, because he didn’t expect to find any oil that far north. The fact that Saskatchewan is already producing five million barrels a year indicates that Price may have underestimated the amount by a significant amount.

North Dakota Senator Byron Dorgan has complained that a lack of pipeline capacity – most of the pipelines in the state are already filled with Canadian oil headed south – has hurt Bakken development. But Schneider maintained that’s not a problem in Saskatchewan.

“We’ve been pumping oil from Weyburn since 1944,” Schneider said. “So the infrastructure is in place.”

Some critics have postulated that investing in the Bakken will divert research from alternative energy sources, but Bardin disagrees.

“Sure it will run out, all oil will run out; but even in a best-case scenario, those technologies are decades away from replacing petroleum,” he said. “You’ve got to remember that those old wells in Texas and Alberta are petering out; we need to use the petroleum from the Bakken to get up to speed on alternative energy sources without ruining our economies.”

But Bardin warns that the Bakken find, though profound, is not a panacea that will supply all our energy needs.

“You hear numbers like 413 billion barrels and instantly think that it’s more than there is in Saudi Arabia,” Bardin said. “But at this point, you’re comparing apples to oranges, because all the oil in Saudi Arabia is easy to get out of the ground.”

He does concede that as technology develops, more and more of the Bakken will become recoverable; and that as oil prices rise, technology tends to develop more quickly.

And many Canadians, who have seen the meteoric rise of production from the oil sands as petroleum prices have risen, know that if the oil is in there, then someone will find a way to get it.

According to TSE listed Petrobank Energy and Resources (PGO.TO) website,  they are “one of the most active players in the emerging Bakken oil light play in southeast Saskatchewan”.