3 charts – 1 remarkable – the others SHOCKING 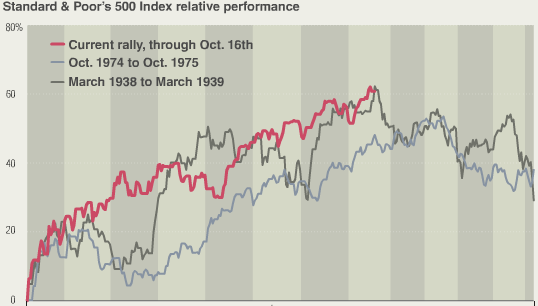 Comment by Richard Russell of Dow Theory Letters – “I take the action of the stock and bond markets this week (and particularly today) very seriously. Extreme caution is advised. The primary trend of the market is bearish, and the secondary trend may now be turning down”.

This Chart by Bloomberg for perspective: “For some long-term perspective, today’s chart illustrates the Dow adjusted for inflation since 1925. There are several points of interest. For one, when adjusted for inflation, the bear market that concluded in the early 1980s was almost as severe as the one that concluded in the early 1930s. Also, the inflation-adjusted Dow is now a little more than double where it was at its 1929 peak and trades a mere 51% above its 1966 peak – not that spectacular of a performance considering the time frames involved. It is also interesting to note that the Dow is up 54% from its March 9, 2009 low which is actually slightly more than what the inflation-adjusted Dow gained from its 1966 peak to today.”

Next chart via Victor Adair. More Richard Russell – “”I was most interested in the latest comments from Lowry’s. They report that their Buying Power Index has lost 15 points over the previous 5 trading days and regained “a rather anemic” 2 points yesterday (Thursday). On top of that, some of their short-term indices are overbought, and they believe caution is now warranted. And so do I.”

This Chart by Bloomberg for perspective: